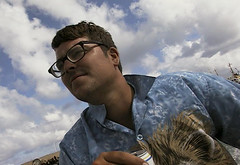 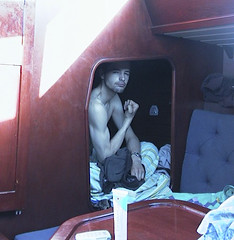 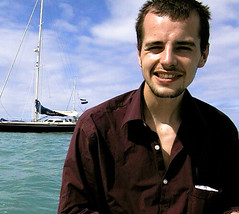 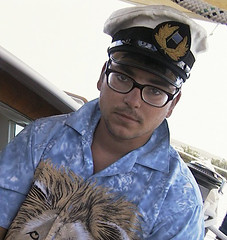 I had started to read up on the Caribbean and it didn't appear like an area I would go to out of my own free will. The history of the area is made up of the whims and dealings of European powers. All its fruits, plants, animals and people have been imported from either Europe or Africa The area doesn't have much to offer, ethnically, the only two ethnic peoples having totally disappeared several hundreds of years ago.

In addition, the couple of days spent on St. Maarten were not only days of rain and wind, I also still needed to work on the Geekcorps site for which we finally found a workaround, late Wednesday morning. Hard work! The most enjoyable activity being shopping for our five weeks at see. Three shopping carts, 20 bottles of whiskey, a total of $800.

Finally, the projected route has also been decided on. We're first going to Bermuda, from there to the Azores and then on to Rotterdam. It means that, in a couple of weeks time, we will be welcomed by friends and family, standing on the shores of the harbor of my hometown. That has to be a mind-blowing experience.

Related:  Think ‘Sinatra’
This text is available under a cc-nc-a license.