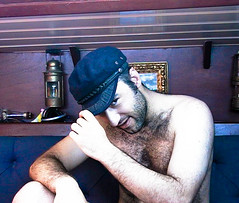 The lost member of The Village People 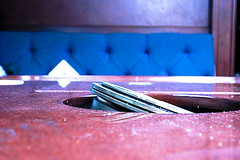 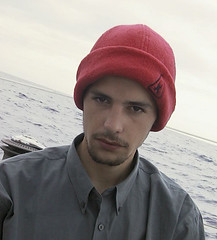 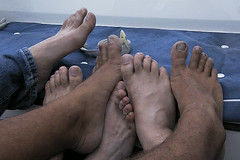 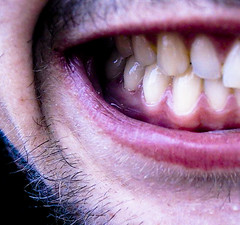 Show me some gums 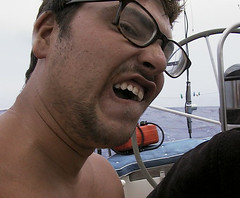 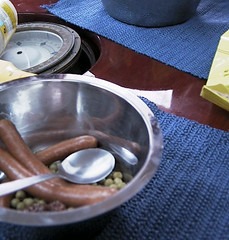 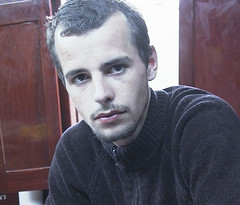 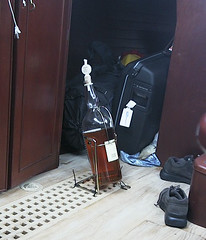 It took me four days at sea to finally find the time and the ability to write a message. Lots of stuff happened and didn’t happen.
We had planned to leave on Wednesday the 17th, but that was slightly optimistic. Buying groceries, checking out with the port authority, obtaining diesel and water and some other semi-official stuff simply took too long to allow for an early take off. Leaving in the evening wasn’t considered a very good idea; a morning departure seemed more favorable.

Not that, in the end, that helped us much as far as comfort goes. All three of us weren’t in the best of health during the first two days. Sijmen actually slept for 42 hours in a row, which left Jim and me to do the first two nights of watch duty. Not that I was in the best of shapes. I was seasick and couldn’t eat much for the first two days, not in the least because what I’d eat, I’d loose almost immediately. Only after my second watch on the second night, when for the fourth time did I give something back to the sea, did I finally clear up; on the morning of the third day I finally was able to actually digest something that resembled a regular meal, although it still took some two days before I completely recovered. Jim totally recovered on the third day, which he celebrated with a good deal of alcohol, basically being totally drunk already before dark. Sijmen took much, much longer to recover.

It was clear that Sijmen’s illness was due to seasickness. At least, that’s what Jim and I thought. Even after four days, however, when he could already deal with the movements of the boat, did he still have problems with his stomach: Pains, cramps, not being able to eat much etc. His state of health resulted in us deciding to visit a doctor in Bermuda to get some professional advice on his situation. A maneuver that would require us to be at sea for an additional two to four days, since we originally hadn’t planned on stopping in Bermuda.

Related:  Back home from Bermuda

Already I understood the boredom that would await us and the fact that my decision to join this trip wasn’t the best one in my life. Sure, our arrival in Rotterdam will be quite an experience, but to be trapped on a couple of square meters with nothing but the same two guys, a significant amount of alcohol and a couple of books isn’t quite everything. There simply isn’t enough to do to make life interesting. I would be happier at home, doing my regular stuff, enjoying the sweetness of my girl’s arms. What was I thinking when I said “yes”?

Yesterday we did send our first messages in bottles; all to our loved ones. On Sijmen’s and Jim’s previous trip, from the Canaries to the Caribbean, they sent out some 50 bottles. Only one, so far, has made it back.
Some things I find missing, already after such a short time are “smell”, “taste”, “touch”, “fresh fruit” and “chocolate”. Although I just discovered we have some chocolate (“hagelslag”) on board, we of course didn’t bring any fresh fruit. So that’s one thing I’m going to get as soon as we arrive in Bermuda. The other three, smell, taste and touch are closely related. I miss the smell of my girl, of home, of my parents place, of familiar stuff. “Touch” should be obvious; there just isn’t much to cling on to. “Taste” is about the canned food that just doesn’t have much of a real taste. The lack of the three combined make for a pretty bad depletion of the senses.