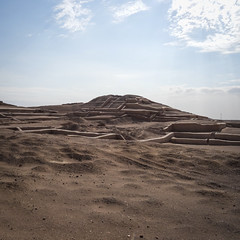 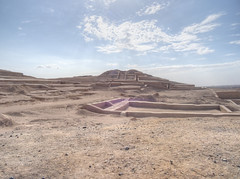 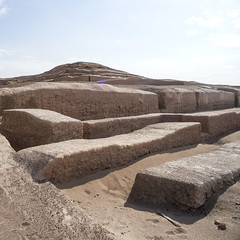 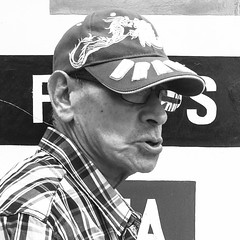 In Nazca, I'm effectively connecting with what effectively was the furthest destination on my trip last year.
Coming into Nazca from the north, my objective, now, was to make a side trip to Cahuachi, a fairly recently uncovered collection of pyramids, many being refurbished natural mounds, made to look like man-made pyramids. Slowly, a consensus is starting to build that the Nazca lines were focused on the religious center that was Cahuachi. That still doesn't really explain the exact use of the lines, but it's speculation backed up by decent theories grounded in thorough archeology.
Some of the related theories are still somewhat difficult to get behind. Supposedly, worshippers walked along the outlines of the figures on the Nazca planes, which strikes me as odd. True, several of the figures represent animals not found in the area, implying they might have represented individual peoples coming to the site from afar, but that really only emphasizes the strong regional function of the site; tribes, with their totems, coming from afar to worship.
The regional function is also supported by the uncovering of stone only found in modern day Brazil.

At the Cahuachi complex, 32 pyramids have been identified, complete with underground aqueducts.

Related:  Another bad market day
This text is available under a cc-nc-a license.