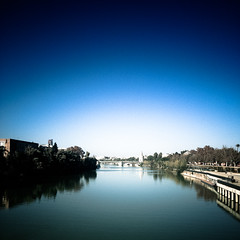 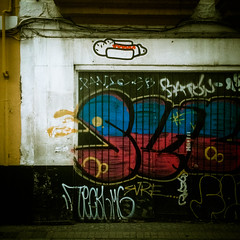 It's less than 500k from Lisbon, but Sevilla is not easy to get to. There is no train connection and though there is the occasional direct bus, I found them booked up several weeks before my trip.
Instead, I had to struggle to get to the right train station in Lisbon, take a train to Faro, switch to a train to the border and from there take a bus to Sevilla. On the up, I shared my first train compartment with a girl who was carrying around in her backpack a small inquisitive terrier, curiously poking his head out and investigating everything around him.

Back when travelhog.net was competing for travelers' eyeballs, that is, more than a decade ago, I was discussing the possibilities of a partnership with the gents behind geocaching.com. In the end, the partnership didn't happen, but its psychogeographic tendencies never failed to interest me.
Now, on Christmas Day, with virtually everything in Sevilla closed, I got around, finally, to doing a few caches myself, while enjoying the midwinter sun.
Where caches, the objective of what's effectively a type of treasure hunt, used to be containers with gifts, where you'd take one out and put another in upon finding it, now, they're typically tiny magnetic containers with minuscule logbooks to mark your achievement.

After Dérive app, I'm now working on a mobile exploration app that has some overlap with both geocaching and the dérive. The geocaching app is very decent for facilitating exploration, but fails in one aspect. Like the dérive, geocaching is about exploration, yet, the app provides a map of your area, which invites the user to take the shortest route to the cache currently set as the destination, instead of allowing the user to slowly drift to his objective.
Also, the app, or perhaps it's a consequence of the online interface, doesn't deal well with content in multiple languages. Mostly, information on caches, when providing information in more than one language, is jumbled up and hard to sift through.
A very well designed aspect of the app is that an Internet connection is not a necessity for using it. When connected, the app will download information on a bunch of nearby caches which is then available after disconnecting.

Related:  Home of the greatest traveler

I seem to recall that, in the past, finding caches was typically done through the decoding of a series of tasks or instructions, slowly directing the user to a destination and the physical cache, with wayfaring, using the user's current position, as an essential part of the discovery. A bit like doing a dérive on Dérive app, but with a tangible objective.
However, the caches that I did in Seville, as well as the ones I later did elsewhere, where all very straightforward, all being just a destination with a story attached, with at the destination a cache with a logbook.

I figure that, instead of using magnetic caches and little logbooks, finding caches could be made more interactive if the caches are in fact QR-codes pointing to a URL that's not made public elsewhere. Or, better still, if the geocaching app would have an integrated QR-code reader that would integrate the logging and commenting system.
Then, as I was walking around in the gardens close to the Plaza de España, one of the must-sees in Sevilla, I fired up the geocaching app again. No detailed information on nearby caches were downloaded to be available offline, except for their locations. The one cache I pursued actually made me find a hidden QR-code. However, this turned out to be, perhaps a geocache, but specifically the objective of a hunt for the similar app Munzee.

A few things on Sevilla

The south of the Iberian peninsula for a long term was under Muslim control. This has left a clear and significant influence on the Spanish language as well as Spanish culture, even though it's also quite amazing how different Spain and, say, Morocco, are, basically the two countries that started to diverge when the Spanish completed the Reconquista at the end of the 15th century.
All Spanish words that start with 'al-' derive from an Arabic counterpart, the Spanish 'Olé' might derive from 'Allah' and a lot of typical Andalusian architecture is essentially repurposed Moorish architecture.

Earlier, it was the Phoenicians, specifically the Carthaginians, who kicked out the Tartessians to found the city of Spal, which was then romanized to Hispalis, from which the country derives its name.
Under the Moors, the place name ending -is was Arabised to -iya, which later resulted in the English Seville and the Spanish Sevilla.

Besides the scores of tapas and the overkill of street sellers panhandling chestnuts, the thing to eat in Sevilla appears to be thick hot chocolate with churros. I thought churros were Brazilian, but it turns out the Portuguese might have brought them with them from China, after becoming intermediaries between east Asia and Europe.

The cathedral of Sevilla holds, most probably, the body of Columbus. Amazingly, though it's generally accepted the man was from Genoa, it's not at all sure. There's some suggestive proof he could have been Portuguese, Greek, Polish and even… Scottish.