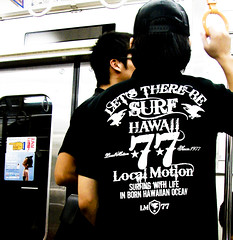 I got up Saturday morning, 7am, to catch my flight from San Francisco to Tokyo. I arrived at my hotel at 6pm on Sunday. The flight lasted only some 10 hours, but I crossed the dateline, so I moved a day forward.
Sitting in the train from the airport to downtown Tokyo, I reflected on the time spent in transit. Oddly enough, I realised I couldn’t really say, with certainty, whether my journey really only had taken half a day, or whether it was one and day and a half. The only choice I had was to rely on the clocks at my disposal.
This suggests that, without outside indicators, it seems to be very easy to ‘lose’ time.

Upon checking in at San Francisco airport, I received a boarding card with the letter ‘S’, repeated four times, in the bottom right corner. When I went through customs, a lady checking the boarding passes marked the letters S with a pink marker and called a guard over. I was allowed to jump the queue.
But only to take off my belt and shoes and empty my pockets. Then, I had to stand in a plastic box which they called ‘The Puffer’. Indeed, air was ‘puffed’ onto me and, half a minute or so later, the doors opened after a green light was shown inside the box.
Then, all my things were moved to a separate area, where two security guards took out cotton pads and started wiping them over my stuff, putting each used pad inside a machine which, seconds later, would give off a sound, supposedly indicating whether it detected anything out of the ordinary. I asked what they were looking for: “Powder… gas… anything that goes ‘boom'”.

I passed their tests and hung around the area for some ten minutes, to see if anyone else was getting the same preferential treatment. No one.

In Tokyo, things do really feel different. At the internet cafe, I’m asked if I want a smoking or none smoking seat.

In my hotel, I’ve got a ‘pod’. A bit like sleeping in a train compartment, but with my own TV inside my pod. There’s a communal bathing room, complete with sauna, which fits 3 or 4 individuals at the same time.
The pod is quite affordable, cheaper than a bunk in San Francisco, for example, coming in at a reasonable 16 euros, when booked in advance. (If you’re interested, I’m staying at the hotel Kawase and I booked through Travelhog.net.)
If you want a bit of an upgrade, a single room, for example, prices skyrocket. If you’re quick, or book well in advance, you might be able to find something for around 50 euros per night, but it’s more likely you’ll pay more than that.
Tiny apartments, one room with your own facilities, go for 700 – 1000 euros per month.

The noodle bar where I had dinner requires its customers to pay a machine, select the meal, and then give the ticket which the machine spews out to the cooks.
Upon leaving, all cooks unanimously say thanks.

The address system in Tokyo is, well, different. An address consists of the name of an area and three sets of numbers, denoting section, block, house. So my hotel is at 2-19-14 Kaminarimon.

Still, Tokyo has so far turned out to be surprisingly affordable. The pod hotel is about 16 euros per night, my noodle dinner (which actually was rice and sushi) was 3.50, internet is less than 2 euros per hour, a short metro ride is just over one euro.

Related:  From Jo’burg to Brighton
This text is available under a cc-nc-a license.