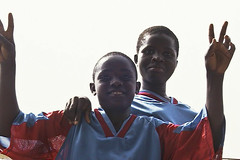 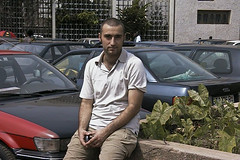 The experiences I had in the first week I was in Ghana, seemed to confirm my point of view in a discussion I had with Ana Maria, back in North Adams. The point was in what way, if at all, African culture could accommodate the possibility of being a primary force in the IT industry, such as Bangalore is doing in India, becoming something of the Silicon Valley of Africa, for the 750 million people on the African continent. However, it seems that African business ethics stand no chance when having to compete with western-run businesses. For one, just that will make it reasonably hard for us geeks to achieve anything in our three months in Ghana.

One of the first things that was easily noticeable, was that all businesses we came in contact with that were, in any way, successful, were either foreign-owned and run, or run by Ghanaians who had worked or studied abroad for a considerable amount of time. Basically, this meant that the successful businesses in Ghana were operated in a Western fashion. So much for African business culture. In fact, in archetypal African culture, there is no room for private enterprise. African culture is based on the commune, the group, were hardships and obtained benefits are shared with the whole group. This also implies that, for no-one in such a society, there is an incentive to work extra hard to obtain any benefit, since any obtained results have to be shared with family and friends. Therefore, it is better to go no further than what is minimally required. Totally the opposite of western style competition between individuals.

Probably the most African company among our partner businesses is ‘Sambus’, the company where Francois is going to spent his three months. On his three month schedule, room was made for settling in. Time for doing so? Three weeks. After just one day, Francois figured he had settled in. In Peter’s company, Company Data, it is not uncommon to take a nap, on your desk, in the middle of the day, or to stand in front of the air conditioning for half an hour to cool off.

JoyFM, my company, at first seemed to be a positive exception to the rule. Employees make quite long days and a significant part of management seems to act according to a western business ethic.

A second impression reveals the underlying structures, however, and makes it clear that Joy, too, very much resembles the other African businesses in the group. For one, constantly, people are walking in and out of the offices of JoyOnline, the actual devision of JoyFM where I have been put to work. In itself not very remarkable. However, most of the people that stop by are ex-employees, making use of the ‘high-speed’ internet connection that sometimes is available. Further, these ex-employees walking in and out isn’t totally inconvenient. On the 6 PCs or so that stand around the office, many of the programs and operating systems are password protected. With passwords only known to specific ex-employees…

Related:  The impossibility of fighting SpamCop?

Without a doubt, Joy also takes home the award for most eye-catching experience. The primary contact at Joy for Geekcorps, Cyril, manager of JoyOnline, welcomed us heartily in our first week in Ghana, when we were doing the rounds of all the businesses. On Monday, my first day at work, Cyril announced to me that that day would be his last day at work. Even more of a delicate issue, since his enthusiasm towards Geekcorps had landed JoyFM the geek they eventually got, where as at first, they were only a second choice business.

The whole thing got even more delicate when, on Monday, before anyone except Cyril knew he was going to quit, CNN stopped by my office to do an interview with myself and Cyril. Beautiful stories about how the geeks’ presence could bridge the digital divide between Africa and the western world, where this person would no longer work for Joy even the next day.

And, only one week after this, on my second day at work, the acting manger was fired. Life is full of surprises.

Speed, or lack of

One of the primary objectives of the whole Geekcorps process is that every geek has one shadow partner at his company, with whom he tries to establish a skills transfer. At my company, some confusion had arisen when it turned out that my appointed shadow partner had a different name from the shadow partner that was listed in the original contract. Only later did it turn out to be the same guy, with two different names…

What was more of a problem, however, was that this guy, Chico, was still at university, meaning that most of the week, he wasn’t in, but studying, only coming in during the weekends or in the evenings. Not really times of the week where I felt like being at the office.

Besides Cyril and Chico, other players are Walter and Michael. Walter a journalist and the acting manager during my first week at Joy, after which he got fired on the next Monday. Michael, also still a student at some college, who is almost less at the office as Chico is.

Related:  Kenya doesn’t have to lock up its daughters

The African style of work, only hinted at, at first, most definitely turns out to be there at Joy. On Tuesday, my second day at Joy, I compiled a schedule for the next three months. Three months is a short period of time, for designing, building and testing a database driven website, while doing a skills transfer in the process, so the schedule was very tight. Everyone agreed with the schedule, which made me very happy. Wednesday, the next day, Walter came back from a meeting with the radio station’s program manager. Immediately, we had to start an online promotion campaign in relation to Valentines day. It took myself and Michael almost two days to create the campaign. Two days that had already been appointed to other tasks, based on the schedule I had made the previous day. The lesson learned? Forget about planning anything.

Two aspects seem to be typically characterizing African conduct. The sense of time and interpersonal relationships. African people don’t experience time as ‘we’ do in the west. In the west, time is continuous. You set an appointment for a specific time. If you are fifteen minutes late, you are fifteen minutes late and you will try to make up for that lost time later in the day. In Africa, one lives from event to event. That events take up a certain amount of conventional time is only secondary, since each event takes up the time of one event. Therefore, for example, traveling from A to B goes faster when taking no break (even though you might be moving at a snails pace), since taking a break when driving turns the trip from a one-event trip into a three-event trip.

As far as interpersonal relationships are concerned, it is of primary concern to be good friends with everyone. If, in the process of being good friends, you also achieve something, that’s nice, but not necessary.

Both these things combined result in, what is called, a polychromatic world view. Someone from the west, in general, is monochromatic. This basically means that he does one thing at a time, continuing with the next thing on his list only after finishing the first item. An African does many things at one, very often not finishing the things he had been working on previously since something else has started to take up his time. This also means that an African is continuously distracted from what he is doing, without that being considered as a fault. However, it also means that Africans have a hard time concentrating on anything for longer periods of time.

During the first week, Stophe made a comment about some expat he know, he remarked that, if you have housemaids in Ghana (as we did in Geekhalla), you can only tell them to do one thing and, after completing the one thing, tell them to do the next thing. This, since if you give them two assignments simultaneously, they will neglect to do one (or both) of the assignments. Working at JoyFM, how terrible this may sound, seems to confirm this world view.

Furthermore, there doesn’t seem to be a drive to understand the ‘why’ of things. Employees seem to be much more interested in the ‘how (do I make this work now)’ as opposed to the ‘why (can I solve it like this)’. Needless to say, this process might work for getting to know all countries of the world and their capital cities, but is hardly useful for learning how to program computers. With computers, each new programming issue is a new issues. Problems that were solved in the past only partially apply with each new problem and insight is needed to be able to solve newly encountered problems. This implies that Africans are bad programmers. My being at Joy confirms this.

However, there is one small light at the end of the tunnel. The quality of the Internet connection at Joy is quite reasonable.

Sports, or lack of

With CNN stopping by on Monday, sadly I had to miss the Hash. A pity, since a bit of change from my life void of physical activity would have been very welcome. The Friday before I had stopped by at the Aviation Social Club, the only fitness club in Accra with mildly reasonable prices, meaning a monhtly fee of less then $40, still about twice as much what I pay back in Rotterdam, my home town in the Netherlands. However, the place is so far away from the city center that you are obliged to take a cab to get there and the machines are, to put it mildly, not of the best quality.

On Sunday, I tried to find an alternative solution. A sports club where one of the previous geeks had worked out now turned out to be closed. When asking around for another solution, when being in the neighborhood of the closed club, a local kid took me through narrow passageways and stinking garbage dumps, before arriving at a very small shack where, in the opening of the door, a big bad-looking Nubian was blocking the way. “So, you want to train with me?”, he said. I said I was going to think it over a bit.