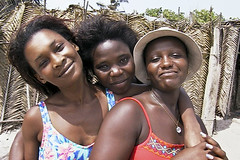 Ready to go out 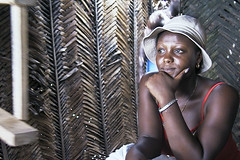 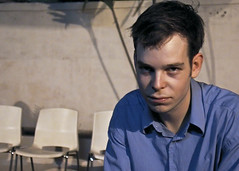 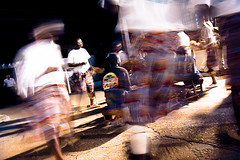 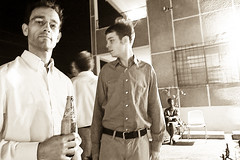 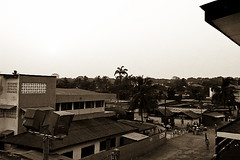 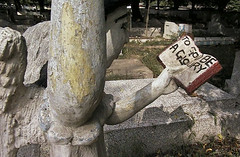 To god be a glory 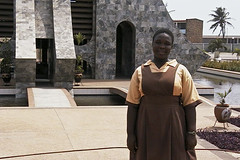 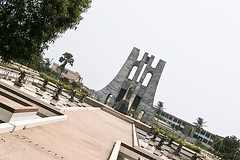 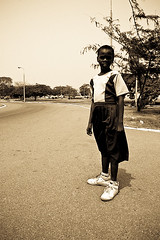 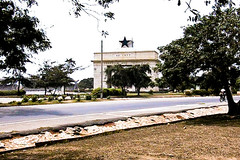 Monday was the first of a series of relaxing days before the start of the real work, the next Monday. During the day, there was nothing much to do but stroll around Accra and try and understand the buildup of the city. In the evening, some of us went with Stophe to the weekly Hash House Harrier run. As they call themselves, a drinking club with a running problem. At least every mid-sized city in the world has at least one weekly Hash and Accra is no exception. What it comes down to is a group of expats who come together once a week to do something of a run/trailseeker thing whitch is followed by an elaborate drinking ritual, not totally dissimilar to your average fraternity experience. If anything, the weekly meeting is a very good excuse for getting drunk and socializing with fellow expats caught up in the same situation as you are.

Although the actual course not that difficult to complete is, since every 500meters or so there's a checkpoint where everyone has to wait until the whole group has assembled again, it mostly was the humid 30degrees centigrade and the month of virtually no exercise what soever that made it a mild challenge for myself. The next week, Stophe was going to be a 'living hare', which would mean that he would set the course only minutes before the whole group would take off. If the group would succeed in taking over Stophe, he would be under the obligation to undress. And all this for the sake of creating stronger friendships.

After the race, but before the start of the ritual, I was almost harassed by one of the local girls also running the Hash. Her sister, who also ran the Hash, was married to one of the expat hashers: Mick, 50+, beer belly, pony tail and a total of more then 10 kids. It seemed like this woman saw in me the perfect opportunity for starting a similar love nest. Most probably, since unlike Tim and Francois I confessed to not being married.

The way in which Helena, as her name was, tried to lure my into her little ploy almost was too embarrassing for words. In every sentence she needed to put in some reference to her being interested in having sex with me and marrying me. Each time I tried to move the conversation to a more casual topic, she got the conversation back to her topics of love and marriage almost immediately. My hints, growing less and less subtle, only made her fanaticism grow for 'succeeding' with me that night. Only after consulting with Stophe and then telling Helena that I was already engaged and that her parents had approved of the marriage made her back down. Although sex does not mean much in Ghana, marriage is sacred.

Related:  Travel in the time of COVID

On Tuesday, we toured the city for more than eight hours to visit all companies us geeks were going to work with. Since the eight different businesses are quite dispersed across Accra, although Francois and Peter work a mere five minute walk from Geekhalla. Tomas, for one, has to commute for almost two hours every day.

The collection of companies we work with is quite diverse. My company, JoyFM, everyone sees as the coolest of the crowd and most probably is. The company, Ghana's most important radio station is being run by a bunch of very young guys and some, what seem to be, whiz kids. The web site of the radio station primarily delivers Ghanaian news and acts, because of that, as a source of Ghanaian news for Ghanaians abroad.

On the other end of the spectrum of 'coolness', you can find TSS. TSS is a former devision of Deloitte & Touche and Jean is the one who has to make a daily trip to the Unilever building in the heart of Accra, right next to Rawlings Park (a small brownish grass court and a memorial) and Makola market (if you can't find what you're looking for there, you can not find it in Ghana). TSS was the company that came closest to what was described to us as the stereotypical way of doing business in Africa, with its short working days, its lack of sense of time and the general atmosphere at the office. Only time will tell if this impression is correct or not. Tomas also has something of a challenge, where his 'boss' the reverend Frim Pong, a pastor and visionair, who tries to deliver wireless internet access to the rich for wads of cash, while giving it to the poor for free.

Tuesday evening, some of the geeks bumped into Ali Michael. An American girl of 22, who won a scholarship to do research in some field, proposed by herself and being the role of Christian womens organizations in developing countries. The sponsor of the whole affair, an organization set up by some former head of IBM, sends some 30 recent graduates all around the world every year, after them having supplied their proposal for research to the organization. To make it even more interesting, each individual is sponsored with a cool $22.000 to last the year. This comes down to this little girl having the opportunity to spend a massive four times as much as us geeks, each month. Remarkably, and probably not related to her financial freedom, after that first Tuesday, Ali is now walking in and out of the office where everyone seems to be totally enlightened every time she sticks here nose in the door.

Related:  On the way out

On Wednesday, Ali and most of the Geeks went to Lalibella. A very good and very affordable Ethiopian restaurant where some of the dishes were even more spicy than the Ghanaian food we had had until then. Maybe it was the spicy coffee we had afterwards, maybe it was the food itself, quite a large part of the group that had dinner at Lalibella had the runs the next morning.

After having a drink and some snacks at the Country Kitchen on Thursday, organized by Sambas, Francois' employer, on Friday there was quite a feast at Geekhalla. Native dancers and musicians, good food and a multitude of drinks made the evening a joy for us geeks and the people from the partner businesses that had made the effort to come down. Gladys, the secretary for Geekcorps in Ghana, introduced us to Ama, a friend of hers, who was going to accompany us to Kokrobite since Gladys could not make it, a beach we were going to the very next day and about a 50minute drive from Accra. A trip organized by Stophe.

The drive, although quite annoying and very tiring, was quite worth it. The beach we drove to was beautiful, the water was great, the setting superb but the fest of shrimp, crab, lobster and fish truly made our day. Jean-Luc, the only Geek not taking a dive was, in the end, persuaded by Stophe to take a tour by canoe at sea. Tim and myself were going to join him. Then Tomas and later Ama, a friend of Ama's and Francois also wanted to join. After we all got into the boat, with an additional three locals who would paddle us around, one of which had elaborate markings on his face, and we lost touch with the ground, we hopelessly sank for being to much people in one small canoe. We had to get back to the original three people going in the canoe to make it possible to actually get into open waters.

Although, at the end of the day, everyone was pretty much exhausted from a day of sun, sea and beach, of course the evening was there purely to get drunk. After I had a very nice Nigerian meal at Nukucafe, where a fantastic reggae band was playing for several hours, almost spontaneously grouped at Nuku's, shortly before Patrick, some volunteer working for some Christian NGO, just had to take us to Biwells, were, earlier in the week, we already had ended our night before. And of which I hadn't been very impressed. This time, the music was even worse than last time, although, luckily, it was much quieter than lat time.

After Patrick had decided to leave, we had no option but to go to the Ukrainian run 'Aquarius', where, for about 5000cedis you buy one German Mark to play pool with, on one of the four pool tables available in the club. Although the place is not totally free from prostitutes, the place is not at all inconvenient. One of the ladies asked me if I could arrange a meeting between her and the 1.95m long Tomas, after she had asked me what was wrong with him, since he was walking around on flip flops. The lady, who went by the name of Naomi, was very pleasant to the eye, but Tomas wouldn't even come close to agreeing on a conversation. Only, after trying for more than an hour, when I suggested the best option was for her to talk to Tomas directly, dis something evolve. However, only minutes later, the club decided to close. Tomas, not very talkative at all, was saved by the bell. It was time for Fusion, a night club very close to Geekhalla.

It's possible to find a club such as Fusion's in every Eastern European city and in many a Western European town. The combination of locals, Western European expats and a crowd of Lebaneze makes for a remarkable but very remarkable mix of cultures that could possible be part of any culture in any country. One of the attendants was Lura, the lady who still owed me a bottle of wine after our betting on the name of the movie 'Asteroid'. The evening, finished of with Lura, Tim, Francois and Doug, one of the two volunteers from the first group of Geeks who was still around, made me believe that I was going to be able to manage here in Accra.