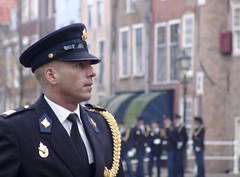 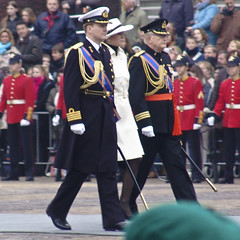 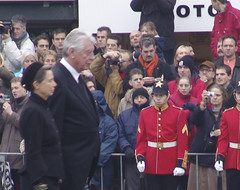 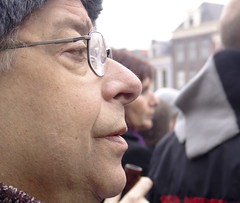 Yesterday, Bernard, royal prince of the Netherlands, was buried in Delft As with the two most recent royal burials in Delft, one of which I attended, the casket was driven from The Hague to Delft, where Bernard was going to get his final resting place in the royal catacombs of the Nieuwe Kerk (new church) in Delft.
Earlier this year, his wife princess Juliana (formerly the queen of the Netherlands) was also buried here. It is the same place William of Orange (Willem van Oranje) was buried.

Betsy her father had come down for the occasion, all the way from Friesland, and although we arrived on the town square around 10 in the morning, some two and a half hours before Bernhard's procession would arrive there, we already had no choice but to look at people's backs, six rows deep.
Later, we learned that the first of the 50.000 spectators had arrived around 6am.

It was a good thing Betsy had brought a small plastic crate to stand on. It also allowed me to take loads of pictures of the many important national and international figures attending the funeral. Unfortunately, many of the pictures didn't work out well since I had to work with a large shutter time because of the gloomy weather and since I was trying to balance myself with one foot on Betsy's crate and another on the side of another crate of the girl standing next to us.
Just before Bernard was carried into the church, three fighter jets and one spitfire flew over the market square in the 'missing man' formation.

Related:  Zetaheal – God with us

It was a good thing it wasn't that cold. Today, we went back to the town square, hoping we could enter the church and watch all the flowers on display for the funeral. Already mid-morning, 13.500 people had visited the church and such a large queue of people was waiting to get in, waiting times were two to three hours. In the cold, this was way too hellish to enjoy.
Instead, we drove to The Hague to visit the Souterrain.

Friday night I spent with friends, first drinking at Loos, then eating at Zinc and finishing off with some vodka at the Westelijk Handelsterrein.
The drinks were on Stevie, for him buying a new home, the food was on Zwan, for him clinching the business deal of his life so far.