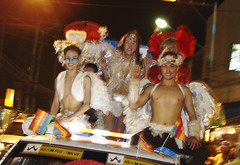 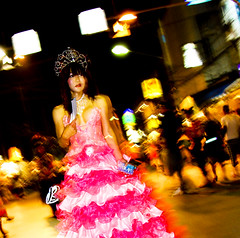 Look at the boobs. It's a man. Seriously. 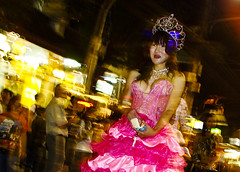 The best dressed man on the parade 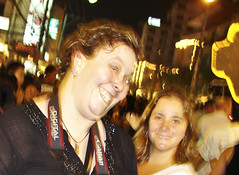 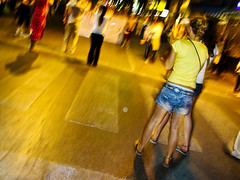 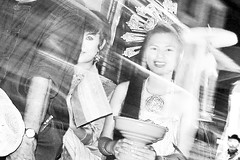 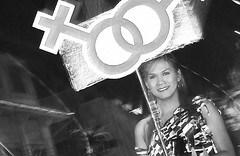 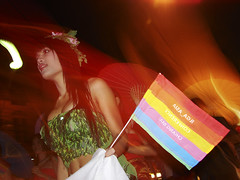 One of the better looking boys on the parade 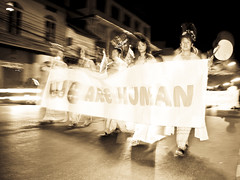 There's one place in Thailand where you'd expect even a plethora of DDR machines: MBK center in Bangkok. But, no.
In Chiang Mai I had already given up long ago on me actually finding a machine.

Today, Betsy and I went over to Kad Suan Kaew, one of the two major shopping malls in Chiang Mai, to look for slippers. Killing time, we strolled into an area we hadn't been to before. To bump into Stepping Stage (watch a slightly disturbing video), a DDR clone I had never even heard of. The machine wasn't in the best of shapes, but helped to alleviate my structural lack of DDR over these past months.
Some twenty minutes later, we walked on. Only to bump into an actual DDR machine. Let me reiterate.

There is a DDR, Dance Dance Revolution, sometimes called Dancing Stage, machine in Chiang Mai, Thailand. It is in the mall Kad Suan Kaew, just off the northwestern corner of the moat.

It's a bit of an odd machine. Although some texts on the machine say "Dance Dance Revolution", the machine seems to be called "Dancing King". The handle bars, at the back of the dance mats are small and look dangerous. It's impossible to hold on to them and they actually look like you could fall over them backwards.

Saturday saw the first ever gay pride parade in Chiang Mai. Of course we had to check it out. And I even learned a new acronym: LGBT, Lesbian, Gay, Bisexual, Transgender.

Betsy has left Thailand. I'm all helpless and alone for the next five and a half months.

Related:  Total ONIge!
This text is available under a cc-nc-a license.