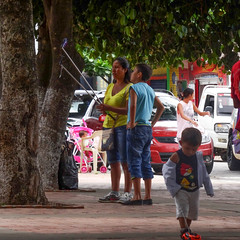 When one selfie stick isn't enough 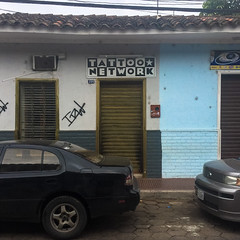 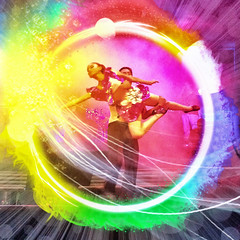 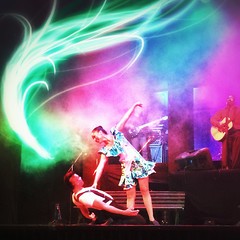 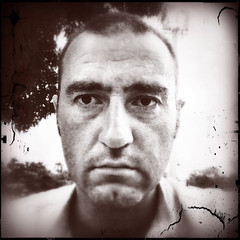 I had made up my mind to get to Santa Cruz, in central Bolivia, from Arequipa, in southern Peru, in one stretch. La Paz is on the way. But, there's only one bus a day connecting Arequipa and bolivia, and, on the day I wanted to travel, this bus had been cancelled.
I ended up on an early morning ride to Puno, at lake Titicaca, where I arrived 90 minutes later than what was il told.
There, the only other bus at the bus station was getting ready to leave as I arrived, and was that day's only onwards connection to Bolivia. Just in time, I managed to secure the last available seat on the bus before being whisked off. Not one Bolivian was on board, but a surprisingly large contingents of Chileans were representing South America.

In Copacobana, I had to switch busses, where I was put on a waiting list for my next bus, leaving only 15 minutes after my arrival. Eventually, I was given a seat but, surprisingly, I ended up having two seats to myself.
In la Paz, there were no more busses to Santa Cruz, so I took an overnight to Cochabamba instead where, early morning, I switched to a connection to Santa Cruz, arriving at four in the afternoon.
At the crowded Cochabamba bus station, one man left his bus carrying a full grown sheep like he was carrying his new wife across the threshold of his house.

It had taken me about 36 hours on 5 busses, including a ferry crossing, to travel the 1500 or so kilometers.

In my corner of Santa Cruz, it seemed a Mennonite convention was happening. The streets were filled with too blond women dressed as nuns with too young men dressed like stereotypical farmers. Turns out there's a sizeable Mennonite community in Bolivia, they live around Santa Cruz, and they get their supplies from the corner of Santa Cruz I was staying in. I noticed that not only where they speaking a German dialect, some of the shops in the area even carried German signage.

Besides the Mennonites, the vibe of Santa Cruz is almost Brazilian. It seems the Andean divide does indeed exist, Santa Cruz essentially being in the Amazon basin, or, to be more exact, in the Bolivian extension of the Brazilian Pantanal.
Santa Cruz has a surprising small town feel to it, even if it's also the economic capital of the country. The narrow downtown streets with columned sidewalks remind of Sucre or perhaps Cuenca, except that very little of the architecture is colonial, much of the city reminding me of a more prosperous frontier town in, say, sub-saharan Africa.

Here, too, just like on the Pacific seaboard, Chinese restaurants are plentiful. And, like virtually everywhere on earth, their brand of Chinese cuisine is adjusted to local tastes, the blend here called chifa, which apparently derives from the Cantonese from 'boiled rice'.

Also in the part of town I was staying in, a continuous street market, open seven days a week. Not blocked off for cars, which slowly make their way between the stalls, this created a unique type of vendor where salesmen peddle mostly clothes specifically for the passengers in the cars.

For onwards travel, there's an almost daily train connecting Santa Cruz with the Brazilian border, some 600 kilometers away. A cheap slower train alternates with a more expensive faster train. The faster train advertises itself as providing beds, but this is only in the sense that long distance South American busses have beds, though they are reclining chairs. Brochures for the train also show a dining car, but though the slow train, which I'm told also ships cargo, might serve food, the fast train is only two short wagons long, each wagon approximately the length of a bus, hence, the name of the fast train, translated, 'iron bus'.

The train line is called the death train. Conjuring up rickety tracks along narrow precipices and bottomless ravines, the name actually hails from a time when the train transported yellow fever victims from the frontier to Santa Cruz.