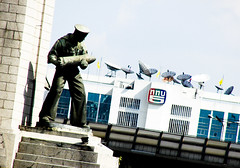 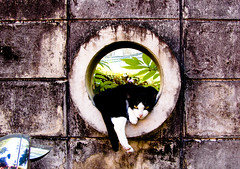 Napping cat is looking at you
World » Thailand » Bangkok » The Blooms

Originally having hopes for visiting Japan, Malaysia or Singapore, we eventually opted for staying inside Thailand's borders and are now going to see the bridge on the river Kwai, where, during the second world war, more than 100.000 prisoners of war lost their lives in building the infamous death railway, of which said bridge formed a part. The area around the town of Kanchanaburi supposedly is very popular with tourists, so we'll see if that's a blessing or a curse.

We took a night train to Bangkok, this time getting one of the lower bunks in an aircon wagon, and I actually had a very decent night's sleep. The hotel in Bangkok, the Blooms, isn't too fantastic, but the sheets are clean and the bed is decent.
As last weekend, Thailand is dry country this weekend. Today, Sunday, saw the elections with last weekend the absentee voters being allowed to cast their votes. Here, around elections, alcohol is officially not allowed to be sold and although the rules are not strictly obeyed, just when you'd want a beer or a nice mixer, chances are you'll have to very look for a place serving drinks. Typically, bars and restaurants catering typically for foreigners tend to be easier going.

In Bangkok, we had what probably was our worst dinner experience in Thailand, yet. For days, I'd been pining for a good Italian pasta so when we headed over to soi (side street) 11 on Sukhumvit, where Felicia, a colleague of mine also staying in Bangkok, had her hotel, I was happy to find not one but two 'real' Italian restaurants.
The area is a bit more upmarket, but I was willing to shell out the money for a good meal. Felicia had had dinner with Tom, yet another colleague, who had lived in Bangkok before, and he told us that 'Pizzeria Limoncello' was a very good restaurant, at least, it was two years before. Now, it was crap.
The drinks were extremely overpriced, the food was a bit overpriced. The 'prosciutto' turned out to be regular ham, the rocket (salad) with dried tomatoes turned out to be very sparsely populated with dried tomatoes and, the kicker, a mandatory 10% service charge and 7% tax were added to the bill. Reading the menu again, tiny lettering near the bottom did mention tax and service charge, but not percentages.
In short: don't eat at Pizzeria Limoncello in Bangkok Thailand. It's crap.

Betsy got a fake iPod shuffle today. It looks and feels exactly like an iPod shuffle. The only difference being the lack of an actual shuffle button and the price: Four of Betsy's for one real shuffle. Fake iPod nanos, for less than a quarter of the real price but with the right logos and an interface that almost matched the real interface were on sale as well.
Oh, Betsy's iPod had one song preloaded: 'Butterfly', a DDR song.