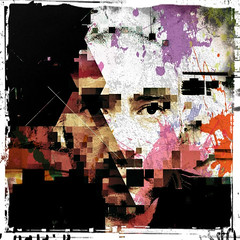 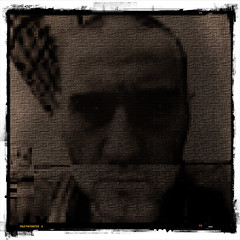 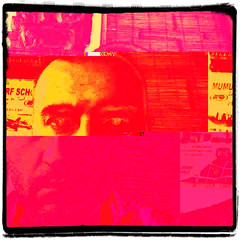 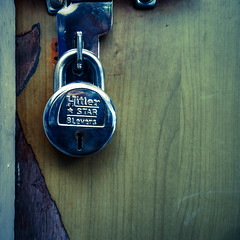 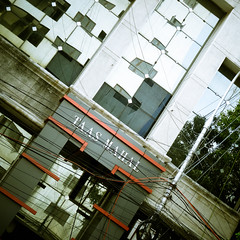 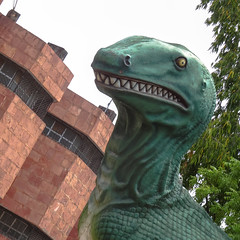 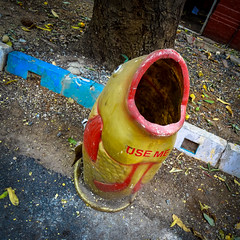 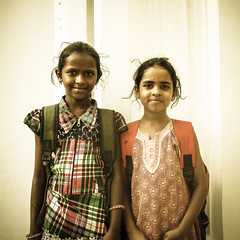 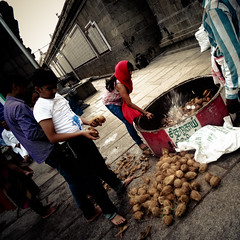 She smashes the coconuts 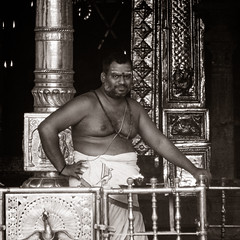 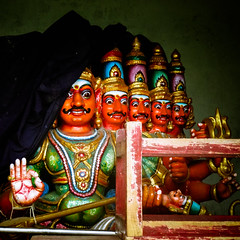 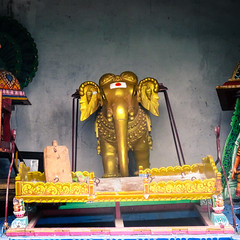 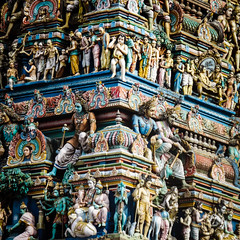 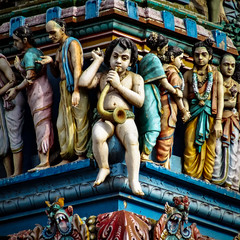 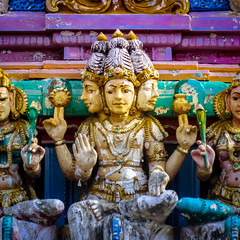 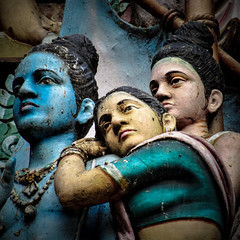 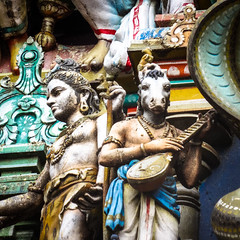 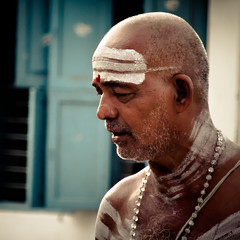 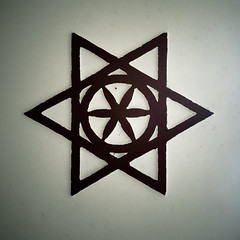 It's generally accepted by scholars, though not proven, that when Aryans circled the Caspian and, eventually, settled in present day Iran, they also pushed south the, what were called, Dravidian former city dwellers in the Indus Valley, the region in the north west of India as well as parts of Pakistan. Up to that point, it's suspected that Tamil, or more specifically, the Dravidian languages, were spoken throughout India. However, with the arrival of the Aryan tribes in the north west of the Indian subcontinent, the end result was of the Tamil thriving in the geographically shielded region of what is now Tamil Nadu, with a culture and specifically a language that's miles away from the north, centered on a city, Chennai, once known as Madras, that's the fourth biggest city in India.
This also means that Tamil, and the other members of the Dravidian language family, are not Indo-European. In fact, the Dravidian languages have confused scholars over the years, only tentative links having been established with Elamite, in south western Iran, and the Uralic, sometimes called Finno-Ugric, language family.
Basically, it means Dravidian languages, including Tamil, are darn old.

Similarly, the ethnological status of Dravidians is a contended issue. Ethnologists either considered Dravidians on the edges of the Caucasian race, similar to Ethiopians, on another end, or of being a race on their own. Recent research suggests that the truth lies in the middle: Indians appear to be a mix of at least two ethnicities, one of which might indeed be Indo-European, with the further south you travel on the subcontinent, the more mixed the gene pool becomes.

After the Aryan conquest of the north west, the Tamil became a sea faring powerhouse, trading with the Romans, Phoenicians, Chinese and, much later, the Dutch and British, leaving a lasting legacy in countries like Vietnam, Cambodia and Indonesia with, even today, one of the official languages of Singapore being Tamil.

Related:  Life is travel, the case for the patron saint of walkers

Though there are quite a few sights in the province, for both its size and importance, Chennai, being the fourth largest city in India, has few sights on offer. There's an old British built fort and, of course, a bunch of temples. The best part, probably, is the region's food. Veggie galore!

The city, to a large extent, is an eclectic collection of rubble, but one thing I thought obvious was the role women appear to occupy in day to day affairs, holding regular, customer facing jobs all over the place.

The city also has a Christian claim to fame. St. Thomas, doubting Thomas, is said to have set up shop here, in the first century no less, before being martyred. Supposedly, his hand print, left during a narrow escape, and the type of relic now more typical of Islam or Buddhism, can still be seen in a cave nearby.
More astonishingly, the church of St. Thomas in Chennai actually holds the apostle's tomb. Or, rather, once did, as the relics were taken away in the third century to finally settle in Italy.
Only three of the apostles have working churches on top of their graves, all in relatively far flung places, considering their sedentary nature during their time as apostles: Rome, Santiago de Compostela and Chennai.

An outstanding temple in Chennai is the Shiva Kapaleeshwarar Temple, an architecturally typically Dravidian construction and with its inner sanctum off limits to non Hindus. All over the floors of the temple were fresh and fading, some on white, some in color, chalk abstracts, presumably invoking the gods and semi gods for protection.
The chalk abstracts can also be seen here and there in the city, on the street in front of the entrances of shops or houses.
But, what was very unique to the temple was these people's apparent strong dislike for coconuts: a round, low to the ground, concrete container saw what looked like a young family with siblings, handing coconut after coconut to one specific girl, having her head covered but with her arms bare, smashing each coconut to pieces within the concrete receptacle.

Related:  A visit to Andorra

Due to its size, less a destination, if impressive, Chennai's municipal beach is the longest municipal beach in the world, after Miami's. Gorgeous wide beaches, but not too easily accessible from town.

The city's few sights are awfully spread out, which means you can't really see them without your own transport. The tuk-tuks, rickshaws, bajajes, or whatever you prefer calling them, are staffed by mostly annoying drivers, but are possibly your only real option unless you want to spend time uncovering the details of the city's bus network. And the only way to really drive down their prices to acceptable levels is to accept stopovers at a few trinket selling tourist traps. Yes, you can make the number of stopovers at shops which give the rickshaw driver a kickback a part of your haggling.
The rickshaw drivers don't get an actual kickback fee on sales, though. they get a 'coupon' for every load of tourists they bring in, whether it's one, two or three in the rickshaw. The coupon is nothing more than a handwritten receipt from the shop in question, with which, my driver told me, he can simply go to a gas station, any gas station according to my driver, and claim a liter of petrol.
With a liter of petrol costing about 1 euro, stopping at three shops meant that my driver effectively more than doubled the fee he received for the 3.5 hours or so I took of his time (I paid him 2.5 euros). Of the 3.5 hours, though, perhaps as much as 1.5 was spent driving to these three shops and me having to deal with the shopkeepers. Two were very tiresome, while one pretty much just let me browse his shop. Thankfully, though the tiresome ones clearly were not used to taking 'no' for an answer, I know the value of many things, but also the price of many others, particularly the kind of products shops like these sell, particularly after having spent the last 10 weeks in the region. So, just like they were bullshitting me with free tea and free almonds, I gladly returned the favor verbally.

Related:  So this is Addis

A Chennai institution is the chain of restaurants called Hotel Saravana Bhavan. Indeed, just like in Uganda, it seems, restaurants call themselves hotels, but this one has made it big. With 26 branches in the city and two more in a nearby city, but no others anywhere else in India, at least according to their own listings, it's an achievement they've got the bulk of their branches abroad, in countries ranging from the UK to France, to Singapore and the USA, as well as all over the Middle East.