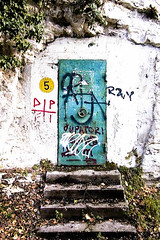 Door in the wall 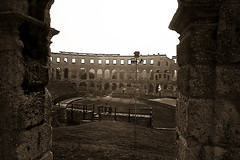 The arena in Pula 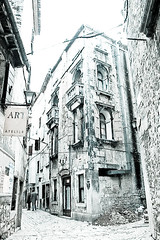 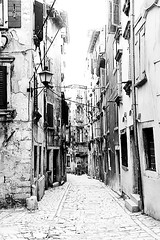 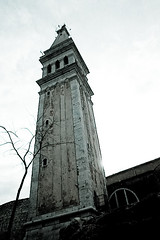 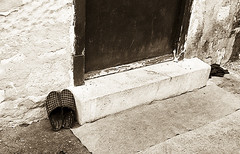 The shoes are waiting 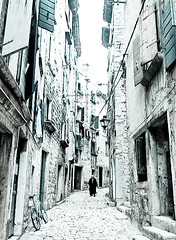 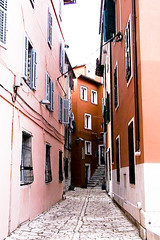 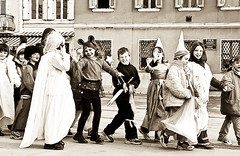 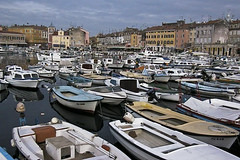 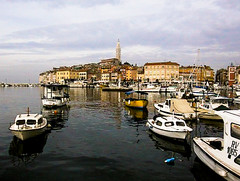 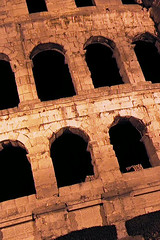 The circus in Pula 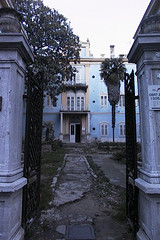 Even in February, the Croatian part of the Istrian peninsula still reminded me of Tuscany during spring. Clean, green, rolling hills under a brightly shining sun, next to a glistening sea with the occasional shore side brown-red freshly ploughed field.

Pula feels like a metropolis with a tiny heart. In its harbour, huge and heavy cranes work day and night to load and unload outgoing and incoming ships and trucks come and go continuously.
Meanwhile, the downtown area still has a significant number of ancient Roman leftovers, not in the least the amphitheater, seating 20.000, which is still used as an open air theatre.

One of the funny things about Croatia is that even in such a small country, different dialects exists. The dialects are identified by the local word for 'what', similar to France (although there, it's the word 'yes'). The three dialects use 'sto', 'kaj' en 'ea'.

I knew I would arrive in Pula near the end of the day and I had tried to call ahead from Slovenia and while on the bus down to Pula, to find a place to stay. However, none of the phone numbers listed in the Planet turned out to be correct, until at one extension, I was forwarded to the correct phone number of an agency renting out apartments. Which turned out to be closed anyway.
I ended up in a recently renovated hotel, close to the harbour, a favorite with captains, pursers and the like, the place flowing over with village-people like costumed individuals.
Not everything at the hotel was as enjoyable. Breakfast was three slices of bread, three slivers of bacon, one cup of butter and one cup of honey. Coffee was extra.

On my sightseeing trip, as I was climbing the hill on which Rovinj is built, its cathedral loomed above me and I was welcomed by partying schoolchildren wearing carnival suits, screaming seagulls and a burning heap of fallen leaves. Because it was still early, I could easily smell the saltiness of the sea and, in between the screaming of the gulls, hear the chirping of the small birds all over the city.
The harbour of Rovinj, however, was already teaming with Croatian tourists, enjoying the milky sun, cold ice-cream and cheap beer.
Obtaining the Pula-Rovinj 8:50am bus ticket took less then 10 seconds, which surprised me. Getting tickets in these kinds of countries can take up to as much as 60 minutes. Questions need to be asked, possibilities need to be checked, prices need to be looked up. This time it went smooth. I started to get the idea that I actually got exactly what I asked for, without the girl at the counter having checked if it actually was possible to travel from Pula to Rovinj at 8:50 in the morning.
When the bus didn't show up, I knew the lady hadn't cared and just gave me whatever I had asked for. The driver of the next bus first made a fuss about my incorrect ticket, but let me stay on the bus anyway. I think I could hear him mutter something like 'stupid foreigner'.

Later, when buying a ticket from Pula to Split, I was really keen on my connection showing up. The bus was supposed to leave at 8pm. The next bus wouldn't leave until around 6am. Missing the 8 o'clock meant sleeping at the bus station. Not an option since the Pula bus station is nothing but a passageway underneath an apartment building where the touring cars, like huge elephants, fight for a place to shelter from the outside world.
Surprisingly, although this bus station acted as the city's main bus station, what looked like more of a central bus station was located just outside of town. The near-empty bus for Split, which showed up nice on time, became a near-full bus in a matter of seconds.
I was lucky. I still had two seats to call my own. But I soon realised why. Next to me, across the isle, an older, perfectly dressed gentleman turned out to be totally drunk. And he needed to talk. To me. When he realised I was a foreigner, he confided that he spoke perfect English and we ended up talking Croatian football for the next 20 minutes. That is, *he* talked about Croatian football for 20 minutes. In Croatian.
After 20 minutes, I got some rest. The gentleman fell asleep.

Related:  Blocos and carnival
This text is available under a cc-nc-a license.