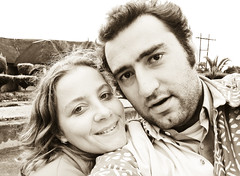 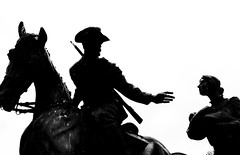 Pass me the baby, quick 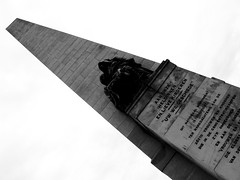 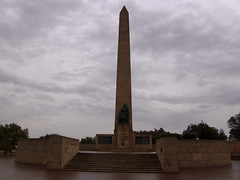 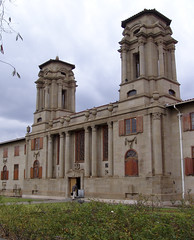 When South Africa was formed, pulling together several smaller nations, everyone was kept happy by creating three capitals: Pretoria as the administrative capital, Cape Town as the legislative capital and Bloemfontein as the judicial capital.
Although I hadn't planned on visiting Bloemfontein, this birthplace of J.R.R. Tolkien has some buildings downtown and a decent war memorial museum worth visiting, if you're around. It's a pity that, as with the other larger cities in South Africa, the downtown area is slowly changing into quite a seedy environment.

After touring Bloemfontein we drove into Lesotho, which calls itself 'The kingdom in the sky'. Today, however, it was nothing but 'The kingdom in the clouds'. Maseru, the capital, isn't very impressive although it was interesting to see literally everyone wearing the Lesotho national dress: a blanket.
We found it nearly impossible to discover a place to stay and when we finally did find one, a lodge some 30km out of town, we decided not to stay since the weather wouldn't have let us out anyway. We arrived and, upon asking how much a room was, were told it was a hundred Rands per four hours. Lesotho, together with Swaziland, has the highest HIV rate in the world.

Although good fun can be had all over South Africa, the country strikes me as having lost a certain authentic touch. If you want to have a good time, party, you almost always will end up in some mall on the outskirts of town. Tonight, after we had driven to Harrismith, on our way to Durban, the owner of our hostel even directed us to some fast food colony next to the Jo'burg-Durban highway for dinner and drinks, where, in some fake old-looking-but-only-five-years-old pub we could have a decent meal. The background noise of muzak made it all so sad, considering, this was the best Harrismith had to offer.

Related:  Technology in Thailand
This text is available under a cc-nc-a license.