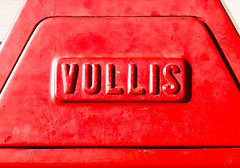 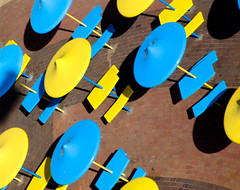 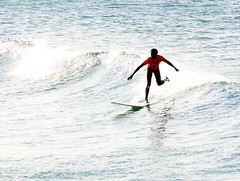 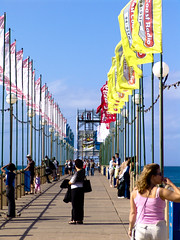 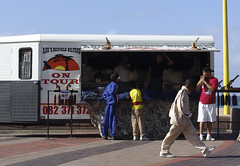 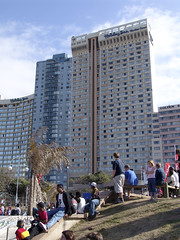 It is thought that Durban has up to a million Indians living in and around the city. The town itself isn't that spectacular (and you're advised to stay out of the downtown area anyway) but it means the food is fan-tas-tic.
There's even a typical Durban dish: Bunny chow. It's a half (or quarter) loaf of bread (a 'bun') filled with curries. It is really, really good. Even Floyd (you know the cook) is crazy about the Durban Bunny chow.

We stayed at the Travelers' International Lodge, which was quite pleasant and got the lowdown on the Durban drugs scene from the two owners, a young couple trying their best.
In the evening, having a drink at the nearby Zeta bar, we bumped into some Aussies who had stayed at our lodge in Harare for the Zimbabwe-Australia cricket matches some weeks before. They were all so wasted that, after they had left, we could hear one of them vomiting just outside the bar for what sounded like hours.

A step to the left

We were able to obtain tickets for The Rocky Horror Show, of course in some mall on the outskirts of town. The venue was interesting, though, although they had made it look like some ancient barnyard. Below was a large space, filled with tables (and chairs) and then there were two balconies overlooking the floor below and the stage, also with tables and chairs. Guests were allowed to bring their own food but had to buy their drinks at the bar.
We had wanted to also do the Sunday matinee show, but a bout of drinking stopped us from getting up early.

Watching the show, I realised there's a book in analysing the musical, along the lines of "The Zen of Pooh". There's enough in the show to explain any real-world behavior and improve on it too. Mental note… Or maybe: "Don't dream it, be it!"