From the temple of the Sun

Temple of the moon

Temple of the moon in Teotihuacan

Temple of the sun

Temples of the moon and sun 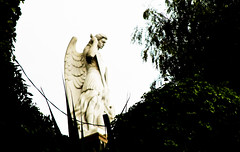 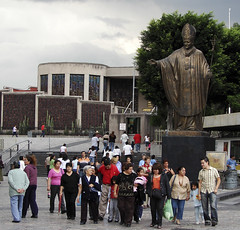 The pope welcomes you 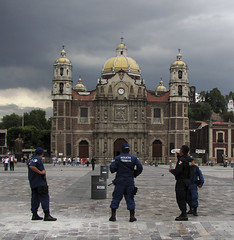 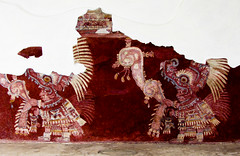 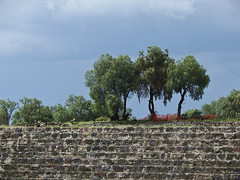 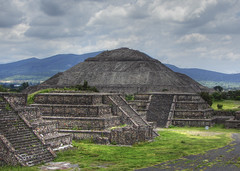 From the temple of the Moon 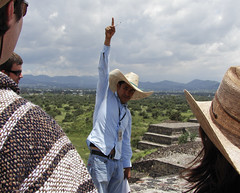 They went that way 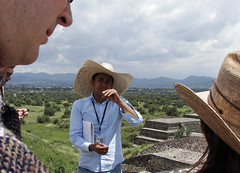 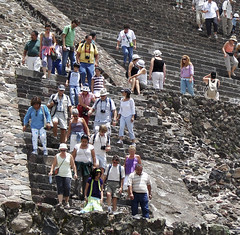 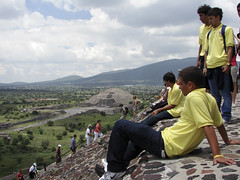 Looking at the temple of the Moon 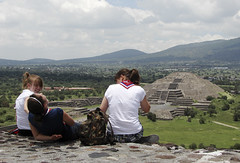 Chickies on the temple of the Sun

The view from the temple of the Moon 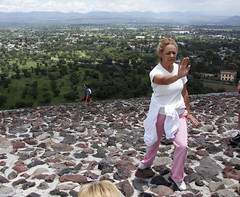 Pushing against the invisible wall 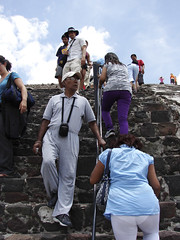 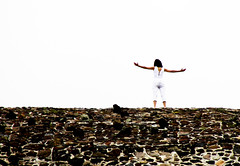 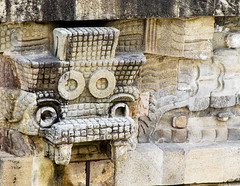 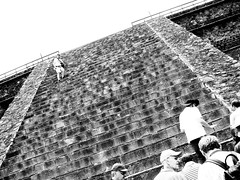 The first time I tried Mexican food was at a Mexican restaurant in Delft, perhaps some 15 years ago. I was not impressed and have never been keen on trying Mexican food since.

Until now. Mexican food in Mexico is fantastic. Varied, rich, very tasty. From cheap street food to pricey restaurants, these people know how to prepare a meal.

Also, Sol, that well known Mexican beer, just released an interesting drink. It's a Sol beer, pre-mixed with lemon and salt. Yes, salt.
And it's tasty.

Some fifty kilometers out of Mexico City, you can find the ruins of Teotihuacan.
We drove there and struggled with the crappy signage to get there. There's a fast toll road which goes straight to the site entrance, but although the road, from our departure point in Mexico City, is supposed to be one straight road, we did do something wrong and ended up in a busy, badly signposted, industrial area. Then again, that also meant we got to see something else for a change.

According to the Lonely Planet, the Temple of the Sun at Teotihuacan is the third largest pyramid in the world, after one other pyramid in Mexico and the pyramid of Khufu in Egypt, as the largest of them all.
This, is nonsense. The temple of the sun is reported by Wikipedia to be 71.2 meters. The three pyramids of Giza, in diminishing size of Khufu (Cheops), Khefre (Khefren) and Menkaure are, according to Wikipedia, respectively 146.6, 143.5 and 103.4 meters high. Obviously this makes the Temple of the sun, at best, the fifth largest pyramid in the world.

Around the middle of the first millennium, the city had an estimated 100.000 inhabitants, making it the largest city in the pre-Columbian Americas. Partially living space, partially temple, perhaps up to tens of thousands of individuals were offered to the gods, here, over the course of hundreds of years.
The name of the site, Teotihuacan, was given to it by the Aztecs, who found the site abandoned, calling it something like 'birthplace of the gods'.

The advantage of having your own transport is that you can stay as long as you like. We did and, when arriving back in Mexico City, were just minutes to late to enjoy the insides of The Basilica Of Guadalupe, named after the virgin of Guadalupe, an apparition of the virgin Mary as spotted by a Mexican peasant in the 16th century.