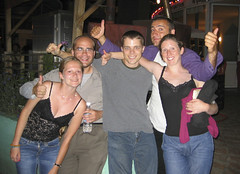 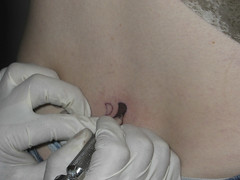 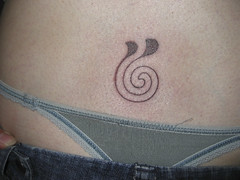 Note: All pictures by Patrick.

In the end, I felt much more sad for leaving then I had expected only weeks earlier. The last couple of weeks have been so much of a blast that they easily outweighed the many work-related inconveniences of the earlier weeks (and months!). Of course, another reason I felt sad on Thursday morning, 6:15, was that, after having partied every day for more than a week, the two hours of sleep I just had had weren’t really enough to make me get out of bed at all. I was snuggled up way too nicely.

Lastly, before taking a cab to Buyant Ukhaa, UB’s international airport, I had to get rid of a whole bunch of books, donated by O’Reilly to Geekcorps, that had been lying around my apartment for over two months. The books were donated during the visit of the first group of geeks and had been waiting in a locked cupboard at Engineersoft, one of the companies the first group of geeks worked with.
Shortly after starting at Capital Bank, I had picked them up from there since the main idea was that any (or at least more than one) company should benefit from the knowledge provided in these books. A plan needed to be formed, by Geekcorps, as to where these books would have to go to. A couple of weeks ago, I had started to harass Geekcorps with questions related to these books, but to no avail. They were still waiting at my place and now I had to get rid of them. Early morning Thursday, I dropped them off at Pat’s. He’ll be here for another two years, which should give Geekcorps ample time to decide on what to do with them.

On my last night, with some 14 people, we had dinner at Taj Mahal. Needless to say, it was perfect. Even Bob showed up who, apparently, has had quite a couple of stomach-tumblers from eating at Babu’s, possibly due to some of the spices Babu is able to acquire from all over Central and South-Eastern Asia which don’t agree with Bob.
Although I had been warning Babu for a couple of weeks that I was about to go, it only now seemed to dawn on him that it was my last day and he was heart stricken. After stating my intention to move on to Khanbrau, where another troupe of volunteers was enjoying Lee’s last night in UB, it took me a tequila filled hour to say goodbye to Babu, Martin and Ramesh.
Babu started out at the -other- Indian restaurant in UB but began his own restaurant three years ago. Now, after being married to a Mongolian and having had one child, he felt it time to move on and, some months ago, invited one of his brothers, Martin, to come over, with the intention of him taking over the business from Babu. Martin, however, hasn’t been at all charmed by the awkwardness of Mongolia and very much wants to go back to Kerula.

Visiting Khanbrau, only to learn almost everyone had already moved on to Ginza, we waited a couple of minutes so that I was able to say goodbye to the guys who weren’t going to swing at Ginza’s. Andy, Bob and Beaver were all headed for home and, after Babu’s, this was the second time that night I felt saddened by my leaving. A pity Beaver hadn’t shown up in UB earlier and I realised I was not going to see Bob or Andy again for a long, long time, if at all. Two guys with whom I like to believe I’ve become very good friends.
Me having shaken up things more than once within our group of friends, Andy made the complimentary comment that my leaving signified the ‘end of an era’. I hope him and Pat, probably the only two expats from our crowd staying in UB after everyone else has left, them not being volunteers, will have a good time during the cold winters.

Ending at Ginza, where I felt the late-nights of the previous week creeping up on my ability to deliver a reasonable dance performance, I mostly hung around one of the booths. Several times, we tried to get everyone at the table to ‘do the eagle, do the eagle, do the eagle’, but twice Tara decided to stare ahead into infinity, ignoring our pleas. I hope her, Jess, Aus and the American face-shitting couple will have a good time in the Gobi.
And I hope the weather will be agreeable. Three nights ago, temperature dropped to a mere 2 degrees celsius. This is summer!

Related:  Give me some sleeep

Joining the crowds at the airport the next morning, I pushed myself through the multitudes of friends and family saying goodbye to their loved ones and arrived at the check-in desk just minutes before it closed for my flight. If anything, my lateness paid off since I was bumped up to business class. And I really needed that, having the extra room, the complimentary slippers, good food (with real cutlery!) and as many drinks on the house as possible. Still, I slept most of the time. I needed that sleep, only waking up minutes before touchdown in Moscow.

Eating and drinking in Moscow is totally un-affordable. What’s more, the only really accepted currency at Sheremetovo-2 (the international transfer terminal at Sheremetovo, one of the four major airports in Moscow) is the Ruble. The beer I had shortly after arriving nearly knocked me unconscious for the alcohol, but the coffee I had later did an ever better job, at $5.50. I asked if the waiter was joking and, with a smiling face, he told me he definitively wasn’t.

So after waiting for nearly six hours, I got onto the last leg of my trip. Packed like sardines in a can, with screaming babies all around me, I had to endure only three more hours before being back home. I tried sleeping as much as possible, but the bear sitting next to me beat me to it, sprawling one of his arms and part of his torso all over me. When we got to the food, I gently started prodding his ear with my fork.
And then, after 18 hours of traveling, the plane touched down. I was back in Holland. At least the country is suffering from a heatwave and not from the dreary Dutch weather and, of course, I got to see my girlfriend again after seeing her for only two weeks in the last four months.

Sitting again behind my PC at home, I have no choice but to look back on the last four months. Yes, professionally, Mongolia is a bit of a mess, but socially, it was fantastic. All expats seem to have this “we’re in it together” feeling, which made us much closer. I had a great action packed time, met the best people and although it seems that for the next couple of months I’m not going to have as much of an exciting time, at least I’ll be together with my girlfriend. Trade-offs, trade-offs.
Although it hasn’t been confirmed officially yet, it seems I’ll be spending two years in Zimbabwe, come January. I’ll keep a blog, don’t worry. ttfn.