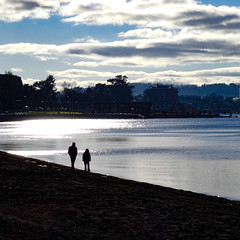 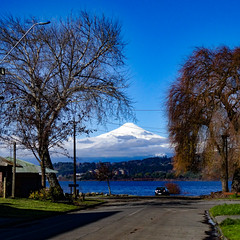 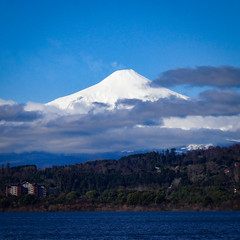 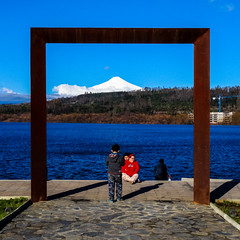 The weather significantly improved upon my arrival in the foothills of the Andes. No rain. Sun shining, the town of Villarrica, on a lake peeking at the mountains, could not have been better.
Though, with the rains during the previous few days, I had come prepared. As I bought my bus ticket in Temuco, the lady behind the counter likened me to Mary Poppins, due to the multi-colored umbrella sticking out of my backpack.

The clear skies also meant that, driving to Villarrica, the volcano overlooking the lake is suddenly, when rows of trees don't obscure the view, just there, in the distance, at the end of mostly flat coastal plain, glimmering white in the sun, the archetypical mountain in a child's drawing.
And, to make it almost magical, the volcano is spewing puffs of smoke.

There are two towns on the lake, Villarrica is the mellow one, most tourists heading for the town of Pucón, closer to the slopes of the volcano. It's low season now, meaning many of the guesthouses are nearly vacant. Yet, the pizzeria, in Villarrica, where I had a Sunday afternoon pizza, was packed with families, out for the weekend, I suppose, as driving from any major urban area in Chile is a drawnout affair, not something you want to do for just the day.
The place, like many buildings in the region, is completely constructed from wood, and could have, for its atmosphere, been pulled straight from any tourist center anywhere. Young female waitresses getting by in several languages, with a healthy sprinkling of foreigners among the staff, speedy service to get the tables empty ASAP, a single musician playing three instruments at the same time (but here performing Andean music) and with the musician on a break, classic rock playing in the background.
Thankfully, the pizza was exceptionally good.

Related:  The rain in Brussels…

The weather did not hold for my second day. I visited one of the hot springs in the area. The water was steamy, while snow was falling from a grey sky obfuscating the surrounding hills.