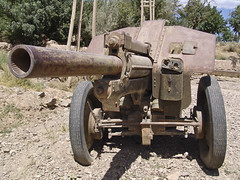 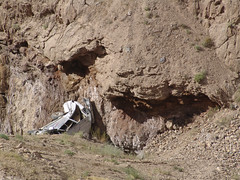 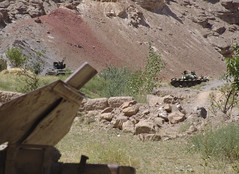 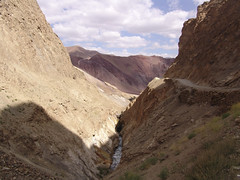 We got up at 6 for an early start. Not so. Earlier in the week, I had asked if it was possible to get breakfast as early as 6. Useful when we wanted to leave for Band-e-Amir at 6:30. It was not possible, breakfast only being available from 7 onwards.
However, when we showed up in the kitchen at 6 and I simply asked for 'chai', we ended up getting breakfast, at six in the morning.

Last evening, we were asked at what time we wanted breakfast. Since we wanted to leave at 6:30, we figured that having breakfast, again, at 6 would be very convenient. We were told it was not going to be a problem.
Until this morning, of course, when at six no one, no one, was in or around the kitchen of the hotel. Some waiting later, I went out to investigate and found one of the cooks lounging near the gate. I told him we wanted breakfast and some 20 minutes later, we were enjoying stale bread, tea, happy cow, jam and cookies. We asked for fresh bread, but the cook said the 'boy' had gone of to the bazaar. On foot.

Then came the process of paying the bill.
For the first time we got to see the owner/manager. He asked how we wanted the bill and I said one bill for four people and one bill for two people (the Frenchie and his driver, having breakfast together with us). 20 minutes later, he showed up with two bills. One for six people and one for one person. It took nearly 30 minutes more to obtain a correct bill.
Finally, at nine, we drove out of the valley, on our way to Kabul.

Related:  Indy
This text is available under a cc-nc-a license.