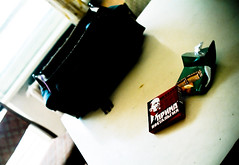 On a boat from Nizhni Novgorod to Kazan 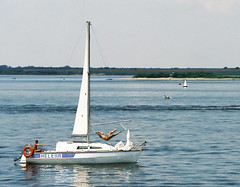 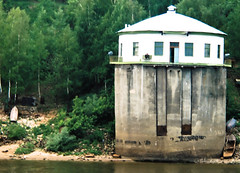 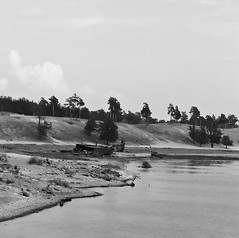 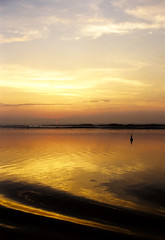 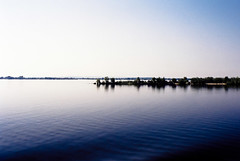 In the train near Kazan 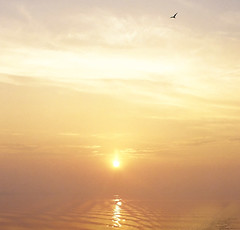 On a boat near Kazan
World » Russia » On the Volga river

Waiting for the boat to leave, I spent some time reading, in a small park close buy when this guy came up to me, asking for some donation for a church/aids/whatever, in exchange for a set of postcards. The guy stuttered, and when I made it clear I didn't speak Russian, he started to stutter in English.
After he had 15 tries in finishing the word 'donation' I gave him all my change just to get rid of him. I considered his method a good marketing technique and read on.

Just like all cabins on the ship, mine was on the outside. Communication with the purser didn't go very well when he showed me my cabin and he left me wandering still, whether we'd arrive the next day or in three days. Every question I asked him, he answered with a profound 'yes, yes, yes, yes', so after a couple of questions I just held my trap shut. Anyway, the cabin actually had warm water!

The boat had four decks. Of the two restaurants, the one on the front side had a great view. Then there was something of a snack bar on the lowest deck, selling beer and salty snacks and there where two 'lounges', with TV a very small library and some board games. The ship could hold maybe 200 people.

As the boat slowly flowed on, the lives of hundreds really passed me by as we passed small village after small village. Its remarkable what the difference in life standard is, between these villages and the bigger cities. Here, all houses where made out of wood, no exception, and obviously there was no warm water, let alone plumbing. In a lot of cases, there wasn't even electricity. It's weird, so close to a big city, Nizhni Novgorod, and so different.

But more than that. This still was Europe, but so very different at the same time. The villages that floated by proved, beyond a doubt, that although Russia is considered a developed country, it most definitely isn't. Ok, some areas are very much developed and on the same level as cities in the 'West', but so much more areas are very much underdeveloped and wouldn't be misplaced, considering their standard of life, somewhere in, say, the middle of Africa.

Still, everyone is so very much the same. All people look alike, have the same emotions, feel the same feelings. While at the same time they speak wildly different languages, have different values and completely different habits. How remarkable it must have been for all discoverers centuries ago. Meanwhile, I started to develop a hunch that we would actually arrive in Kazan the next day.

The banks of the river where a remarkable site. Generally, there was a very small line of beach, after which a pretty steep hill would start, banking in the river itself. Many people where sunbathing on the beaches. A remarkable feat in itself, since very often this would mean they had to walk long a long distances to actually get to the place they where actually enjoying the sun, since the hills where just too steep to be climbing down -or up- upon. Here and there, stairs actually went up from the water to the top of the hills, even at places where no beach was present. Exactly why, for what purpose, was left open to debate, since no apparent reason seemed to exist. (If it was for people to get to their boats, then where where the boats?)

I actually bumped into a couple of American missionaries who were traveling downstream from Nizhni Novgorod by boat too. Howard, a huge American, and one of his sons, Benjamin, where discussing the route the boat would follow. Next to a wall chart covering the whole trip of the boat up to the boarders of the Black Sea, they where considering the cities that would float by and what they could do while lying ashore in those cities.

They actually lived in Nizhni Novgorod and had been trying for several years to 'convert' the locals to their form of Christian religion. Being really nice Americans, I had to say almost everything twice, them not really registering what I was saying but continuously smiling. At least, I learned that the boat actually would arrive already the next day. What's more, they offered help, if I needed some translation done when dealing with locals.
Really friendly, although I didn't really see what problems I could still run into when on the boat.

They had started with 23 missionaries in Nizhni Novgorod a couple of years ago and had grown to more than a hundred. Now, they had established several churches around Russia. One was in Nizhny Novgorod, another one was in Irkutsk and they where going to start a new church in Yekaterinburg before the end of the year. Already, over the years several families had gone home and now only two families where left in Nizhni Novgorod.

Howard had a hard time not going on about how there currently being a need for the Lord in Russia, and assistance and reassurance in general. Really remarkable, although I found it reassuring, in a way, that people are actually able to have, apparently, so much faith in something, anything without, apparently a shadow of a doubt. Even though I couldn't really agree with what Howard was going on about.

Only minutes after saying goodbye to Howard and his son, I discovered there where showers on board! With warm water! The next morning (after spending the evening under the stars, with a disco going on on one of the outside decks) I went for a good shower. The water didn't turn out to be warm, it was steaming hot! Close to unbearable. Although after I found the knob for adding cold water, it started to get mighty comfortable. And the 6 rubles I had to pay, as it turned out afterwards, where very much worth it. Not only that, the soap that was part of the 'first-class-package' on the train from Warsaw to Minsk came in very handy now too.