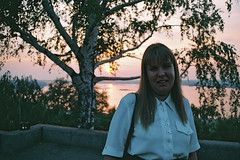 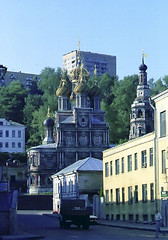 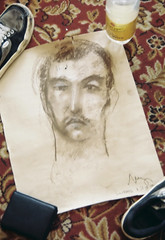 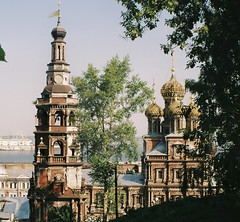 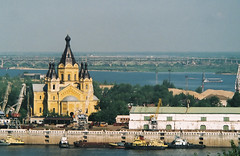 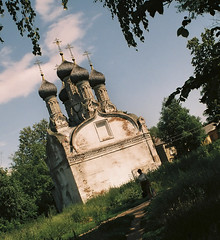 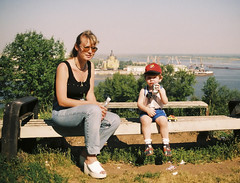 Having shared my train cabin with three women, one of which spoke French, I arrived at Nizhny Novgorod (the city used to be called Gorky) station quite early. Strangely enough, almost all signs on the train station where bilingual. Russian and English. Having no problem finding the exit of the train station, I did have trouble finding someone to tell me where to go, finding the city center. Not in the least, of course, because actually no-one spoke English. There was, however, a computer terminal where you could get train information for trains traveling across almost the whole of Russia!

The train station in Nizhni Novgorod is pretty far away from the town center and it took some time before I found the right tram that would bring me there, for an astounding $0.01. Just before boarding, I tried to take a picture of an old lady selling berries near the train station. When she saw me taking a picture of her, she started screaming, calling me names, shouting for help and, in the meantime, gesticulating frantically with her hands and throwing some of her berries at me. I got out as soon as I could.

Immediately getting of the tram after crossing the huge Oka river I started walking towards what was supposed to be the city's port. Indeed, in the shape of a ship's hull, the boarding quay soon came up. However, no ships where to be seen. Inside I first tried to understand when boats where leaving in the direction of Kazan. Again, like in Moscow, boats where not leaving as often as was suggested by the Lonely Planet, although there were more here, then in Moscow. The next day a boat would already leave for Kazan. That seemed almost to good to be true. Now I only had to find a place to stay.

I asked the two girls, that helped me out in finding a way out of Nizhni Novgorod, if there was a hotel around. One said there actually was one, right in the same building. Right then, the other girl seemed to say that she couldn't be serious. I couldn't sleep in a hotel like that! The first girl figured I could and pointed me the way.

Funnily enough, the receptionist at the hotel (indeed in the same building, covering the uppermost three floors) also had a hard time agreeing that I could stay in the hotel and at first wanted to send me into town and find a hotel there. Some persistence finally helped and I landed a two-bedded $2 hotel room, overlooking the river. Really cool. Okay, there where no showers, toilets where on the corridor and the glasses to drink from where covered with green moss, but sometimes you need to make concessions.

Shortly after, I managed to get a boat ticket, second class, to Kazan. Third class tickets where no longer available, but at less then $20, I would occupy a two-person cabin by myself. It's was unclear however, how long the journey would take.

With the ticket in my pocket, I started walking towards the city center, which is basically a small area around the city Kremlin. Perched on a hill, overlooking the point where the Volga meets the Oka river the city really is a nice place to go to. The center is really friendly looking and also much more quiet than Moscow. Surprising, since it's Russia's third biggest city, after Moscow and St. Petersburg.

Just too much vodka

The walk from the port to the city center is a really nice one. You can climb the hills that cradle the river, which gives you a really unparalleled view of the area. Shortly after I climbed up, a small bar, with terrace, crossed my path. I went for a Gin-Tonic and enjoyed the scenery.

Almost immediately after sitting down, three men, two about my age and one, who turned to be above 70, invited me to share vodka. Hard to decline the offer, I started of on what turned to be a very bad afternoon, alcohol-wise. They kept on pouring vodka from cheap half-liter bottles into plastic cups. Them, downing their vodka in one gulp, me taking sips. That is, at first. When they made it clear it is considered very bad behavior to sip your vodka, I had to down it too. And after each gulp, the cups where refilled again. Bottles came and went. And kept on coming. They had to, since the custom is to always finish your bottle. But when a bottle is finished, you have to get a new one as well.

Grandpa, who turned out to be Georgian, was also a postman and a good fencer. After he found out I'm part Iranian, he constantly had to drink to Georgian-Iranian friendship. First he actually wanted to fight. Not against me, but with me, against the two younger guys at the table. When It became clear I didn't really feel like fighting and opted for drinking instead. Then, after each gulp, he kept on offering me a piece of sausage on which several people had already been chewing. I think I declined the sausage and he didn't seem to mind; His big belly, in the open because of his unbuttoned shirt kept on shaking with laughter, in sync with the movements of his face that almost continuously showed his lack of almost all his teeth, in an ear to ear grin.

A good Russian custom is to eat a lot while drinking. It soaks up the alcohol and leaves you with less of a headache when waking up (because you always fall asleep eventually when you drink as much as Russians do). One of the things to eat is dried, very salty fish. It's especially good with beer and, although the main course was vodka, I munched a couple down. The biggest problem with these fish is that you have to totally dissect them before you can eat only a little bit of them.

Close before I managed to leave (grandpa had already left some time before, too drunk to remain seated he asked me to come home with him, which I declined), a group of two babes and one chaperone joined us three. Introducing themselves and hoping to catch on with the binge. I'm not sure whether they succeeded. Shortly after, I said my goodbyes and walked on to the city center. Before arriving, however, I decided to take a nap in a field. A really enjoyable break, since the sun was shining, the temperature was good, and I couldn't manage to walk straight anymore. Some time later, I awoke. In the city center, on a bench.

I don't know how I got there but my awakening was very comfortable. Two girls, one very nice looking, the other very friendly but quite fat, tried to explain that it wasn't very wise to sleep on the bench as I was doing. Understanding that I wasn't from around there, they where interested even more and had to tell their friends I was foreign. One of their
friends, a 28-year old guy with a big smile and too many bottles in his hands, immediately came over, told me that he was a good man since he was a lieutenant in the army, showed me his ID and wanted to drink to friendship. I relived my experience of the afternoon and, after explaining what had happened, they liked me even more and, to my surprise, no more drinks where necessary. All that, before 3 o'clock. In the afternoon.

Shortly after, when inside the Kremlin (which means no more than city-fort), I came across the fatter girl, Natasha, again. Still very nice, we tried to talk a bit without much success. She turned out to be studying law or something and was now on some sort of patrol, trying to keep everything under control. Or something. At some point, we where sitting on the river-side of the Kremlin, overlooking the two rivers at sunset, when there was a speedboat passing by at high speed, down below. "Novo-Russki", she said.

I welcomed the night, being able to sleep off the day. In the morning I changed some cash and did some shopping so that I would have something to eat during the boat trip to Kazan. My guess was that the trip would take three days, so I got quite a lot of bread, cucumber, tomatoes, loads of cheese and even some very cheap caviar! Breakfast I had at a Baskin and Robbins, a Haagen-Dazs-like ice parlor. When sitting on its terrace, I realized that a lot of the people on the streets are so very white. Surprising, since summer temperatures generally are 30 degrees-plus for longer periods of time. After one week of Russia, I had already completely blackened.