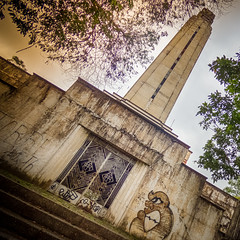 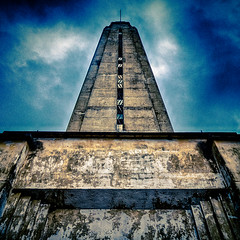 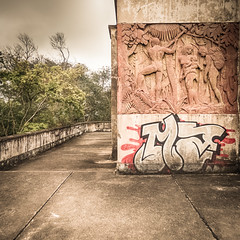 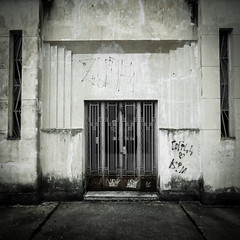 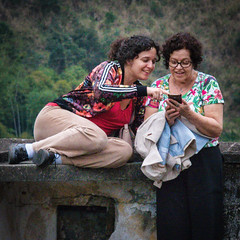 Kids and their phones these days 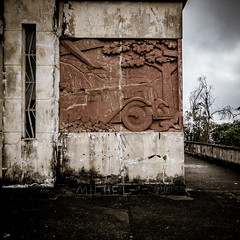 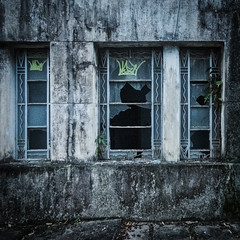 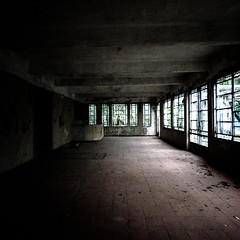 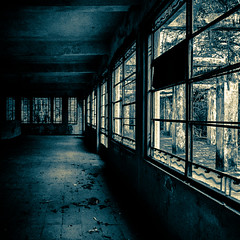 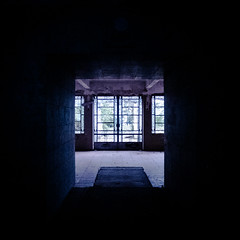 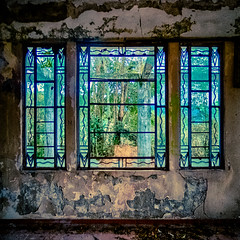 A window on to a new world 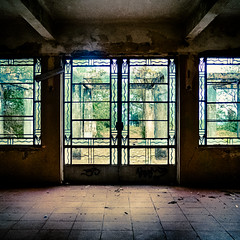 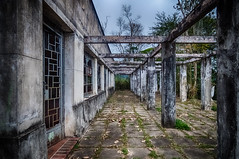 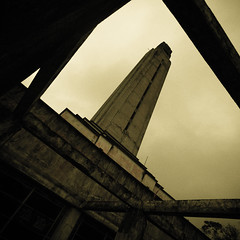 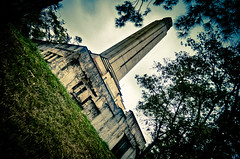 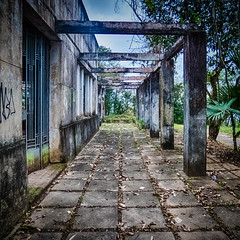 You will never see this monument when leaving Rio de Janeiro. It’s only when arriving, from the direction of Sao Paulo, that you pass by the Road Monument a fine Art Deco construction, now in ruins.
Opened in 1938, after construction was started then years earlier, the space beneath the large obelisk used to contain a restaurant, the whole site designed as an area of recreation, a welcome rest when traveling, by ‘fancy’ car, between Sao Paulo and Rio de Janeiro, respectively the economic and federal capitals of Brazil, at the time of construction.

The interior of the building contained the first works, murals, by Brazilian artist Candido Portinari on the themes of socialism and nationalism. Portinari gained international fame for his work Guerra e Paz (War and Peace), two large panels, each about 150 square meters, that were donated to the New York UN headquarters in 1954. There, they were on show for over half a century, before being restored and then re-inaugurated by Ban Ki-moon in 2015, praising both the artist and the work.

It’s considered that Portinari died for the completion of these paintings, succumbing to lead-intoxication from the fumes of the paint he used. Not the only ironic fact associated with his work, as he was also banned from entering the US to inaugurate the panels, accused of being a communist. This, in the same year that Dwight Eisenhower signed the Communist Control Act, outlawing the Communist Party of the United States. Yet, still, Dag Hammarskjöld, the UN Secretary General at the time, praised Portinari’s work as “the most important monumental work of art donated to the UN”. Clearly, Ban Ki-moon could not stay behind.

Portinari, though, was indeed a communist, a member of the Brazilian Communist Party. Standing for deputy in 1945 and senator in 1947, he fled to Uruguay shortly after, during the communist persecution of communists under the Brazilian president Dutra. Ironically, the monument on the road between Sao Paulo and Rio de Janeiro is right next to the highway named after Dutra.
In 1952, a general amnesty followed, Portinari returned to Brazil and, perhaps in a way to signify a mea-culpa on the side of the Brazilian government, Portinari was designated to submit art for the new UN headquarters in New York.

Portinari’s commission of the murals in the Road Monument, as him being communist, shouldn’t have been all that unexpected. Portinari was commissioned by the director of the Federal Highway Commission, a man with the fascinating name of Iedo Fiúza. Fiúza, afterwards, embarked on a somewhat successful political career which included being the presidential candidate for the Communist Party of Brazil in 1945, being presented as ‘the candidate of the people’ when he became the second loser after general Dutra, yet beating Dutra in the state of Rio Branco (nation-wide gaining a total of close to 600.000 votes on a population of around 45 million).
So, Portinari being commissioned was likely a matter of a few lefties helping each other out.

Sadly, the murals are no longer at the monument. In the same way that the 5000 Cruzado banknote, which featured Portinari in the 1980s and 1990s, has also disappeared, the latter having been made irrelevant by the Brazilian hyperinflation of the 1990s. The murals were moved to the Museu Nacional de Belas Artes in Rio, in 1999, and unveiled shortly after. (Though, an article from 2016 claims the murals are at MASP, in Sao Paulo.)

In 2013, O Globo reported that the monument was going to be refurbished. Though a report on a court case from two years later suggests no restoration was actually done. Yet, on our visit, the monument clearly was kept clean, though the building itself had also clearly not been restored.

What does remain are eight panels on the outside of the monument, in a Socialist Realist style, by the French sculptor Albert Freyhoffer. Freyhoffer’s work pops up in a few places around Brazil, like this one in Rio, or this one in Blumenau, but he apparently was not important enough to keep an online following, or even a bio.

The architect of the monument itself was Raphael Galvão, who was also one of the seven architects of the Maracanã stadium in Rio.

The ‘Road Monument’, though perhaps ‘Monument to Roads’ makes more sense as a translation, was envisioned at a time that interstate highways were cropping up all over Brazil, slowly replacing the previously dominant railway connections, few of which remain today. The road next to which it’s located was the first road connection between the cities of Sao Paulo and Rio, inaugurated by the then-president Washington Luis in 1928. Some thought a fitting monument for the grand scale of all future Brazilian road connections was required, and on an initiative of the Touring Club of Brazil, work was started on the monument in 1928.

The top of the obelisk functioned as a lighthouse, with a rotating light visible for miles, even up to Rio’s south zone, aided by the monument being near the top of a pass in the one mountain range you have to cross when coming into Rio from Sao Paulo. But, the light died long ago, the monument being shut down in 1978, by the military dictatorship, never to be reopened.

Still, if you’re close, stopping by is more than worth it. If not for the architectural abandonment, then for the gorgeous view of the Serra das Araras and the nearby valleys.