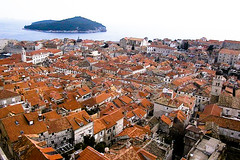 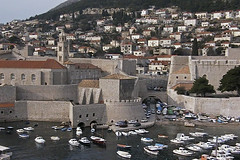 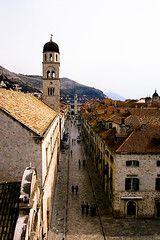 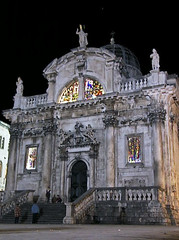 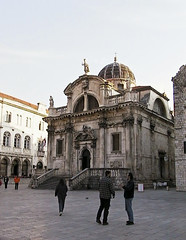 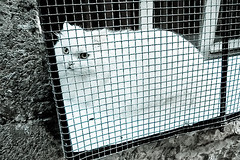 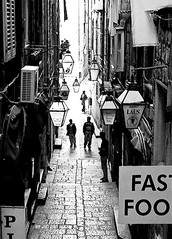 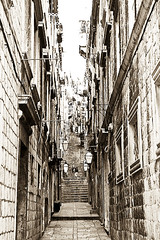 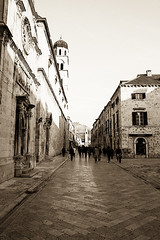 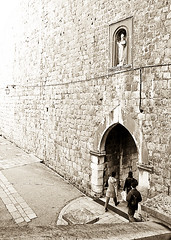 Rovinj and Piran might be like tiny, slightly chaotic, provincial Italian towns, Dubrovnik is like a royal, majestic city. With its granite old town, wide main streets and a city wall actually going around the whole city, sometimes as much as seven meters thick. Adriatic to the south west, mountains to the north east. I fell in love with Dubrovnik.
Although armies lay siege to Dubrovnik during 1991 and 1992 almost nothing can be seen that can reminds of the war, although two thirds of all the houses were hit. Restoring the roofs after the war was an issue since the factory where originally the tiles were manufactured no longer exists. Since it was important to quickly patch up the roofs and avoid damage through rain, mechanically produced tiles in stead of hand-made tiles were chosen. First from a factory in Agen, in the south of France, later from Slovenia. Now, the tiles come from a small factory close to Zagreb. Only the slightly different colors of the tiles, noticeable when you walk on the city walls, betray their history.

In Dubrovnik, the sunny and hot (this was February!) weather got me to spend some time reading a book on the city walls, overlooking the Adriatic.
When I got up, at 3:15pm, I finished my walk along the walls and returned to the entry point, to find the gates locked. I had to climb the gate to get out.

After seven hours on the bus from Sarajevo to Dubrovnik, I finally was able to stretch my legs on the towns bus station. At least, that's what I thought. Already before I got off the bus, 4 people were attacking me, all trying to rent out a room. After them fighting it out for a while, I asked one lady what she was offering. "Are you sleeping alone?", she inquired. A bit surprised, I asked if she had a picture of her daughter.
I ended up with the only man in the group who had pictures of his hostel with him and could point his place out on a map of Dubrovnik he had.

The hostel was located on the edge of town on the Liechtensteiner Put and consisted of a ground floor, where he was living with his family and a second floor, with some six or seven rooms. The house was only recently built and had a large balcony overlooking the sea, shared by some of the rooms. Every time his mother caught site of me, she had to give me sweets or Turkish coffee.