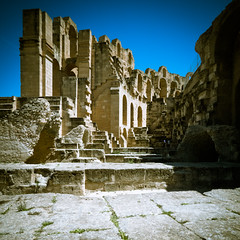 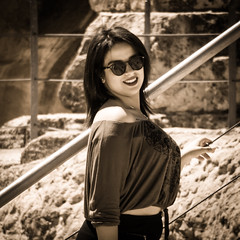 The gem of El Jem 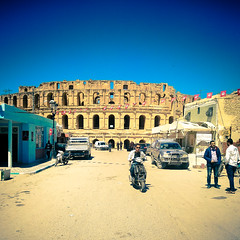 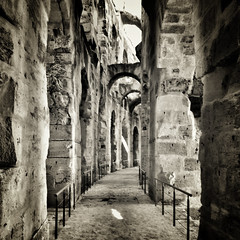 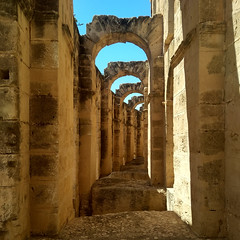 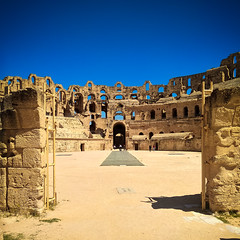 The colosseum of El Jem 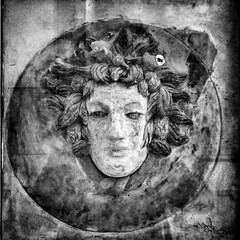 I'm stuck in this piece of ceramic and can't get out 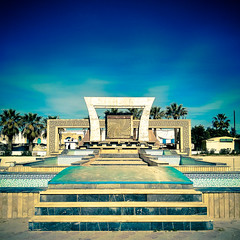 Once upon a time, the precursor to present day El Jem was so powerful, when the city was so annoyed by an imperial (Roman) envoy, it killed the poor man, then decided that one of their own should be emperor of Rome. Which the Roman Senate accepted.
At the time, El Jem was Thysdrus, seemingly an outpost of the Roman empire, but a big trading center and an important source of olive oil, once predominantly supplied by farms on the Iberian peninsula. The Romans had taken over a Punic settlement, yet keeping the Punic name.
The town’s upper class had replaced the small arena with a much larger colosseum, but the wealth would not last. Shortly after the introduction of Christianity as Rome’s religion, the city’s prominence waned. The arena first found a second life as a fortress, before being abandoned, it’s building blocks used to lay the foundations of new homes in the town.

Yet, the story wasn’t yet completely over. One story has it that when the Arab hordes trundled into North Africa, they needed to subdue a local Berber queen. She refused and fortified herself in the town’s colosseum. The Muslims, assuming the surge wouldn’t last long for the Queen’s lack of resources, were dismayed when the surge went on for months.
In fact, to spite her atackers, at some point, she started throwing fresh fish at them in a display of abundance. Obviously, she had access to the outside through a network of tunnels. The atackers went in search for the tunnels and sealed them off, winning the battle.
Or so this story goes. The Romano-berber queen Kahina did exist and seems to have destroyed most of the olive trees of the Thysdrus area in 695 CE, but died in present-day Algeria.

There’s little too see in El Jem, today. The arena is impressive, not much smaller than the colosseum in Rome, and one fairly enjoyable museum filled to the brim with impressive mosaics as well as Roman ruins, remains. The town is sleepy, if not unpleasant.

In a cafe, I ordered a mint tea. The owner got a cup and the tea pot and started pouring the tea while raising the pot, making the tea foamy. Putting the tea on the counter, he pointed to a bundle of mint, also on the counter. “Here’s the mint.”
Later, having a late lunch, the proprietor told me that since the revolution, tourist numbers have dwindled to 25 or 35 percent, with the countries now providing the most tourists being China, Algeria and Russia.
Boys on roller blades skated by.

Both here and in Sousse, it was surprisingly cold, particularly towards the evening, when the cold breeze is not offset by the blissfully shining sun in a blue sky. My bed in Sousse needed three thick blankets to keep me comfortably warm.