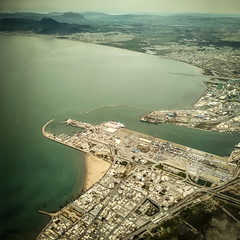 Air France employees were on strike on the day I was to fly out of Tunisia. So were Lufthansa employees. At first, airline tried me to get to rebook, then they got me on a later flight with another airline, then they got me on the same flight, operated by another carrier.
It was an early flight, and after getting up early and a quick breakfast, I left my hotel, to find Tunis’ taxi drivers also on strike. Time was running out.

I walked back to my hotel, where the receptionist tried to convince me that, no, the taxis couldn’t be on strike, as they had also been on strike a week prior, but it was me who convinced her. I got her to call around for a car and got one that was supposed to arrive in 25 minutes.
After 20 minutes, I got her to confirm the car’s arrival, to hear that the driver himself was still waiting for the car to arrive, for him to pick me up.
Wasn’t there anyone in the hotel with a car who could drive me? There was!

Traffic was difficult but not horrendous. I eventually got to my gate a mere 8 minutes before my flight was to take off.

I talked with my driver about Tunisia’s changes over the last few years. It was not going too well, “The revolution is not yet finished”.

Related:  Life is travel, the case for the patron saint of walkers
This text is available under a cc-nc-a license.