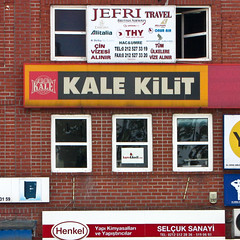 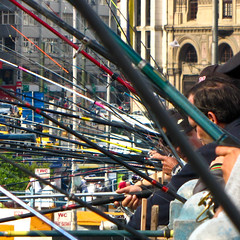 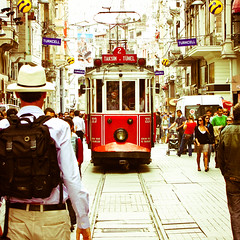 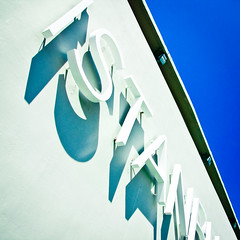 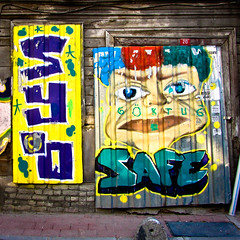 Istanbul Modern is a privately owned modern art museum on the banks of the Bosporus. Opened in 2006, it houses a wealth of art and regularly changing shows and is very much worth a visit.

the main floor of the museum contains the changing collections, the ground floor has an extensive and interesting photography exhibition, with works from their collection of currently nearly 8000 photos by mostly, if not all, Turkish photographers.
The photographs are good, although most also reinforce the upcoming consensus that photography as an art, with the rise, first of Flickr, now of Instagram, is dead; of the photos that were on display, it won't be hard to find better photographs of nearly the same subjects taken at nearly the same locations on one of those services.

The modern art section contains a bunch of interesting works and, overall, is more than worth the visit. But what it also shows is that so much modern art is self referential and just a tad too full of itself, to the extent that it runs the risk of becoming irrelevant. Or, at best, that perceived value is becoming more and more subjective, and therefore worthless in itself.
That said, a few of the works were socially conscious, which gives them meaning beyond the intrinsic absence of value and makes them more relevant and interesting.

Still, it's very nice to see so much attention to art. Particularly when I live in Africa, where, in most countries, very little attention is given to one of the indicators of the rise of the middle class.

One of the works in the museum's collection was by south African demi-god William Kentridge. Sadly, it deployed a stereoscopic trick, which made the central objective of the work lost to my eyes.

The restaurant attached to the museum, seemingly very classy and very popular for lunch, is horrendously overpriced.
Walking down Taxim street, connecting the square with the same name, past Galata tower towards Galata bridge, I stumbled upon an open air photo exhibition, unifotofest, with the subject 'Change'. The exhibition runs at seven venues on both sides of the continental divide and is well presented, though someone with a better understanding of the English language should have supervised the translations.

A long time ago, in an empire not so far away, the emperor decided to try a little harder to keep his foes out, and built some impressive city walls, allowing him to seal off his peninsula when needed.
The Theodosian walls, built by Theodosius II during the fifth century, are still standing, though not in the greatest of shapes. You can zig zag past them, roughly walking along and, it is said, occasionally on them. The walk is much less of a tourist attraction as they could be and are quite impressive, while the communities straddling the insides of the walls are rather cute, if quite poor in places.

Walking around town, it's just too tempting not to stop every kilometer, particular when off the beaten track, and have a tea or an ayran, a somewhat watery yoghurt. I also stopped at a makeshift restaurant, a dad and son selling freshly grilled fish sandwiches from their own boat, to have a break and enjoy the view.
The only thing they were selling was the sandwich; freshly grilled fish with lots of chopped tomatoes, cut unions, on a fresh loaf of bread. A good deal, for 5 lira. I asked if they could get me a tea, which the father told his younger son to get from a trying-to-be fancy restaurant perhaps 100 meters down the quay.
Sadly, the tea turned out to be an unreasonable 4 lira.

Related:  Chachachacha Changes!
This text is available under a cc-nc-a license.