Inside the blue mosque in Herat

Inside the blue mosque in Herat 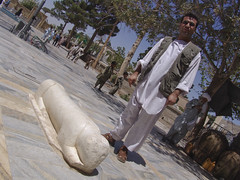 Penis shaped dog... on the floor 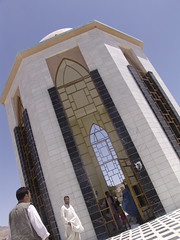 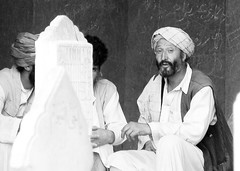 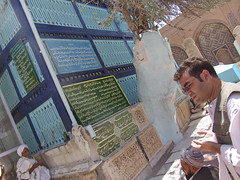 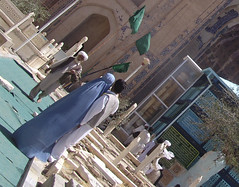 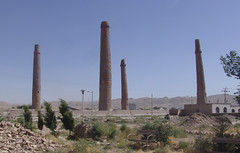 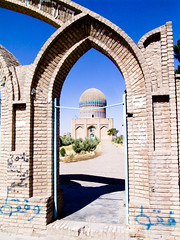 Mausoleum at the Musalla complex 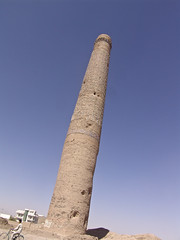 Minaret at the Musalla complex 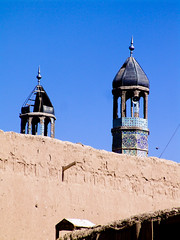 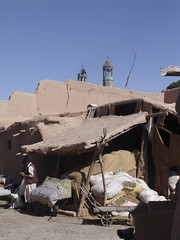 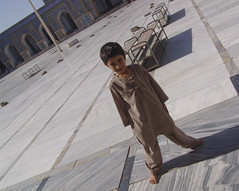 Inside the blue mosque 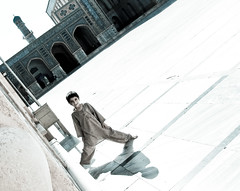 Boy inside the blue mosque 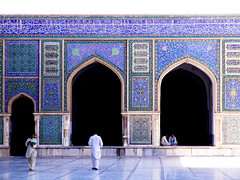 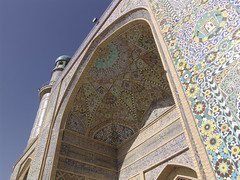 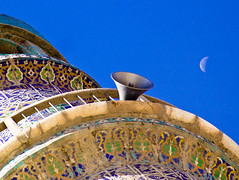 The blue mosque and a white moon 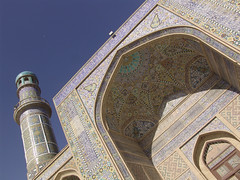 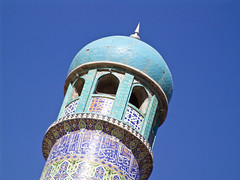 One of the minarets of the blue mosque 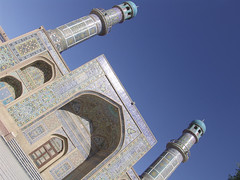 Nearby the blue mosque 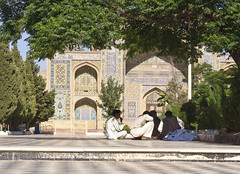 Outside the blue mosque 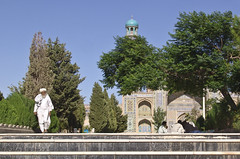 One guy from the DACAAR office in Herat was so kind as to show me around the nice sights in the city. Not only very nice but also very pleasant. Someone to talk to and tell you details about the town I wouldn't have gotten otherwise, and also taking away the need for long walks. Herat is quite a large city, with the DACAAR office and guest house on one end and two of the major sights on opposite ends of the city.

First there was the Blue Mosque. Arriving through its garden, I wasn't all that impressed, it looking like a smaller version of the mosque in Mazar.
Then I entered the thing, after noticing a crow making funny noises close to the entrance. Both his legs had a copper ring around them, with something of small bells inside which dangled when it walked.
'Amazing' doesn't come close to describing the mosque. 'Fantastic' isn't enough. Interestingly, as recent as 1930, the mosque was not very impressive, 'no colour; only whitewash, bad brick and broken bits of mosaic'. Practically all the fantastic tile work, true to the original Timurid designs were recreated since 1943. At some point, WFP (the World Food Programme) provided boys with food in return for learning how to make the tiles.

After the mosque, we drove over to the Musalla complex, where five nearly falling over minarets and one mausoleum in very bad shape are all that is left of an extensive complex including a mosque and a madrassa, a religious school, where now only five of the original thirty(!) minarets remain. As late as 1885, most of them were still standing. One British invasion, two earthquakes and Soviet firepower changed most of that.

Time for a short stop, we enjoyed tea and immensely strong sheesha, overlooking the town from the north, talking about history, politics and economics.
Then, it was time to visit Gazargah, the shrine of a sufi poet and mystic who lived in Herat in the 11th century. In true Muslim fashion, the poet is said to have magical powers, still, and women who cannot conceive wrap a stone in a cradle of linen and hang it from a sacred ilex tree next to the grave of the poet. Don't ask me what 'ilex' is.
In front of the complex, there's a penis-shaped dog looking at the entrance. When people asked the architect why he put the dog there, he said he was like a dog for the poet.

After stopped by at the mausoleum of Ishmael Khan's son, but before we drove past the old fort, downtown, closed to visitors, we had very decent, sweet, handmade ice cream at a local parlor, before heading back to DACAAR.
Then it was time for lunch. 'Lady fingers' (okra) mashed with tomatoes and potatoes. A bit bland, but very nice once some spices were added to the mix. Meals at the guesthouse are reasonable affordable at an average $0.50 each.