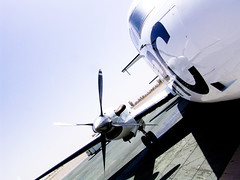 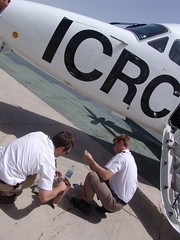 From the moment the engines were fired up, the Indiana Jones music started to float through my head. And it kept on playing until we arrived in Herat.
My flight was on an ICRC (Red Cross) plane. 14 seats, 7 on each side, of which only 8 were occupied. Two propellers and loads of movement once in the air.
The service, piloted by South Africans, who for some reason control half the trade here in Afghanistan, makes circular patterns, going from Kabul to Kabul, stopping in several places along the way.

Before Herat, we stopped in Kandahar. Very dusty, very hot and not all that safe. American military was waiting for us on the tarmac and they grew nervous when I took out my camera.
Earlier this week, some 50 ‘Taleban’ were killed here in the region, a former Taleban stronghold, and one of the pilots started talking about that: “Do you see that tree line over there?” some 100 meters in the distance, of course I saw it. “Earlier this week, Taleban forces started to shell the Canadian camp from it. One Canadian lost a leg.”
Terrible stuff, of course, but also 50 Afghanis lost their life. And we were parked right in between the Canadians and that tree line.

Herat is clean, quiet and green. The 120 days of fierce winds have started, (like an ancient curse from an ancient god over a long-ago disappeared people: “One third of the year you will have this terrible thing, one third of the year you suffer from that disaster and one third of the year you will suffer the 120-day wind!”) so you don’t really notice the heat when you’re outside.
At the same time the city is also a main thoroughfare, probably for traffic coming from Mashad in Iran and the next major city in Turkmenistan all going south. Most notably, many cars are transported and many car and car-parts stores line the main boulevard.
Already, driving through town on my way to lunch at Marcopolo (yes that’s how they spell it), I’ve seen the blue mosque in the distance. But what took my attention as well were the rikshas with, on their sides, not only the name and phone number of the driver, but also his email address.

At the Herat DACAAR office, I’ve seen the best Afghan babe so far. And I could even understand her reasonably well, her speaking clear Farsi, articulating her words with care.
And, of course, I was almost immediately asked to perform some IT helpdesk functions.

Also, people here look quite different from in Kabul. Faces are rounder and less worn, skins are lighter and people appear to act less frantic as well. Also the girls, as far as you get to see them (many not wearing the burka but the Iranian chador), are truly babes.
Prices are also significantly lower.

And here, too, the many horse drawn carts have their horses adorned with bells and red woolen balls, something you can see in more than half of Eurasia, from Hungary to Mongolia.