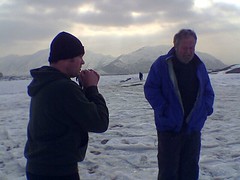 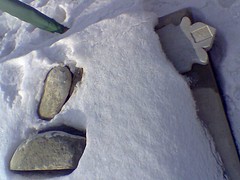 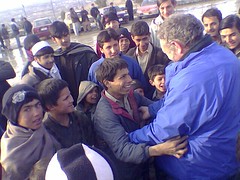 Getting to know each other 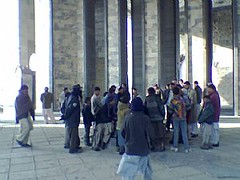 It's already been a busy weekend. Yes, I know it's Friday, but in islamic countries, the Friday equals 'our' Sunday, so the weekend's now halfway done.

Yesterday night, with some 8 people, including two local guys from the office, we enjoyed sheesha and tea at the Iranian restaurant. The same we went to earlier this week.
After that, driving home with Giovanni and Lev, who lives close to us, Giovanni confessed that some Italian NGO was having a party tonight. We went. The drinks were free and the women were thin and dark, smoking thin long cigarettes from between well manicured long fingers.

Today, things started well with brunch at the Elbow Room. It's a bit pricey, at 11 dollars, but considering it's an all you can eat, all you can drink, it's not that bad. And their offerings are extensive, ranging from pancakes, through salads and juices to custom made omelettes.
Afterwards, for the first time, I spent time walking through the city. Quiet (it IS Friday) but nice. And it was also pleasant none of the street-kids-out-for-foreigners bothered me with their overpriced newspapers or magazines.
I visited several DVD stores, with shitloads of new and compiled DVDs at very reasonable prices. But what was more interesting was the bookstore of the actual Bookseller Of Kabul (from the book). Unfortunately, he wasn't there, but his sons were.

Afterwards, I walked over to the Park Palace hotel, where today's hash started. It was a much bigger crowd than last time, but although Giovanni did show up, Alexandra chose not to come.
We ran close to Nader Shah's tomb. Still nice from a distance, when close by you can see that the mausoleum is in a complete disarray. As on the previous hash, by the time we had come back to our starting point, some 50 locals were trailing us.

Around the tomb it was very busy. Mostly with young men flying kites. A very enjoyable sight.