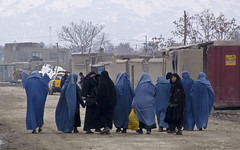 Don't look back in anger 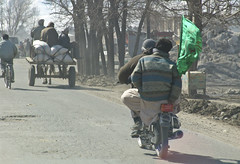 Getting ready for ashura 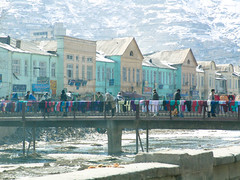 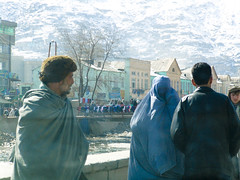 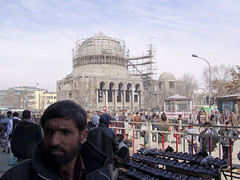 Since we had city power till around 12 at night, I thought of trying out the shower today. We have a boiler, but it doesn't work when we're on the generator. With city power running till midnight, the water is still hot in the morning. The boiler is upstairs, but the shower is downstairs so after turning the shower on, I had to wait almost 10 minutes before nice warm water was trickling down from the shower head.

Yes, I actually had a shower this morning.

Not all is lost, or so it seems.

Yesterday evening, we had dinner at my boss her house. We were eight: Eddi, my boss. A woman, with, indeed, a rather interesting name. Alexandra, the Danish former tv-journalist, now DACAAR's public information officer. Lev, the Belgian database guru who started three weeks ago at DACAAR. Jesper, the Danish designer who's leaving for a holiday in south east Asia tomorrow, the bastard. Giovanni, the Italian GIS specialist. Lyn, programme manager at the Water and Sanitation Program (I think) and from Oz. Leendert, the Dutch boss of Giovanni.
This is about half of the expats at DACAAR. Why this half was selected by Eddi, I don't know. Five of us only recently started, but not Alexandra, Giovanni and Jesper.

We had lasagna and some apfelstrudel-like cake, with cream, for desert. Nice. It took a while for the group to losen up, but as the evening progressed, the group slowly did, and I was even able to make some jokes about child molestation. Now, that *must* mean it was a good dinner.

Related:  A baby is a comin’

Two days ago, we had gone to an Iranian restaurant, in the hope of smoking sheesha and drinking tea. Within seconds after sitting down, sodas, water, salads and snacks were put on the table. We didn't seem to have a choice but to order dinner. We did, and, seconds after ordering, the dishes with really, really, really tender and tasteful meat were brought out. Afterwards, we did manage to enjoy a sheesha.
One good evening.