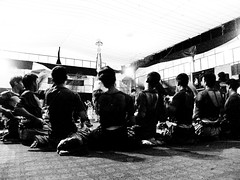 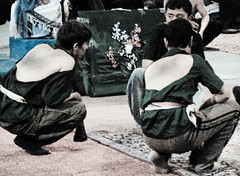 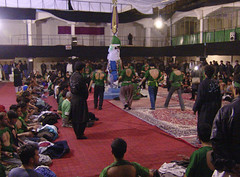 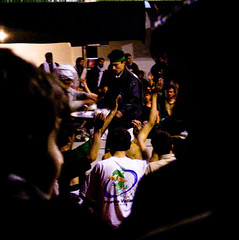 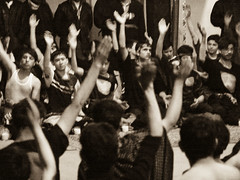 Who wants a beer? 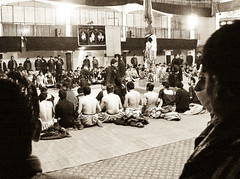 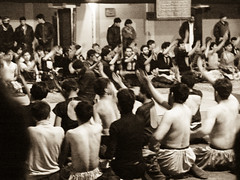 Almost since the day I arrived, we've been kept awake by chanting from the loudspeakers of the shia mosques in town. The reason? It's the month of Moharam, and the 10th of Moharam is called Ashura, and the Shia community in Kabul was preparing itself for what was to come today. You've probably seen it once on television: people beating themselves, either on the head, breast or back, while in procession.

The Shia are a minority in Afghanistan, so it isn't considered good form to do such a procession in public. So what happens is that the procession is done in and on cars, while the beating is done in mosques.
We were supposed to be guided by one younger guy, also working in DACAAR, but he had some trouble getting organized. We grouped at 12 noon, but struggled to find out where and when we had to be. In the end, our guide already having left long before, we decided to just check out the local mosque. By then, it was already hitting nine in the evening.
We knew it was a Shia mosque and our day of waiting turned out to have brought us some luck. Not that we knew it at the time, but instinct prevailed and we joined the processions of cars, starting to make their very quiet round through Kabul.

After an hour or so of driving, we stopped at a reasonably sized mosque. By the time we got in, many younger men were already sitting around in a large circle, in the middle of the mosque. My first thought was to join them and sing Hash songs, but I refrained from doing so.
After a while, young kids coming round with tea and milk, several different 'leaders' started singing, sometimes with the whole group joining them, sometimes the group answering to their call. Most of the time, the guys were hitting themselves. Mostly on the chest, taking turns with both arms, hitting themselves with long sweeping motions. However, after a while, some also were invited into the middle of the circle to beat themselves on the back with some sort of gray sweeping broom.

Related:  Zetaheal – God with us

Chests were bruised, as were backs. Some of the guys wore no shirts, but most wore a shirt with a low cut front and a large 'hole' on the back, allowing them to beat themselves right on the flesh.
Because the crowd was so young, the activity gave me the impression of an initiation rite.
Also, before the event, we were all a bit unsure about what to expect in terms of safety. Particularly, if you've ever seen or heard stories of this event in Iran, you'd understand our initial reluctance.
However, if anything, people were very friendly and the atmosphere was good, even positive. Taking pictures was no problem whatsoever and it seemed that half of the people in the mosque were spectators as ourselves, some as curious as we were.

With Ashura, the Shia remember the battle of Kerbala, where their imam Hussein and his tiny band of brothers was killed by a huge force of the opposing imam, the man who was recognized as being the rightful imam by what became the world's Sunni population.
It is this battle alone, and the discussion of who was the rightful imam that sets apart these two opposing factions within Islam. The differences are minute, but the internal strife is significant.

All in all, it was a long day of waiting. But we did get our reward. Only 25 years from now, the festival will finally be in the middle of summer. Now that should be slightly more pleasant. The sub-zero temperatures in the mosque were hardly enjoyable.

When, last week, I was driven around by Khalid, on a short tour of the city, I noticed something interesting with the national stadium. No, no hands or carcasses were laying outside, but the walls of the stadium were adorned with the five Olympic rings. Twice. Interestingly, one of the two collections of rings, had its colors mirrored. Instead of blue-black-red-yellow-green, it was red-black-blue-green-yellow.

Also, I couldn't help but notice the many flower shops downtown. I asked Khelid were the flowers came from and he said from Pakistan. I was impressed that, given the cold, these flowers were still able to shine as beautifully as they did. An exotic and very colorful treat in this city.
Yesterday, when I was walking around town, checking out the stores in Chicken street and Flower street, I also walked past one of these flower stores. Turns out, the flowers are all fakes. Probably made in China…