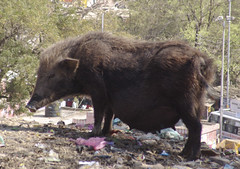 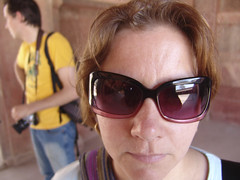 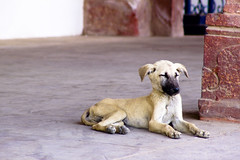 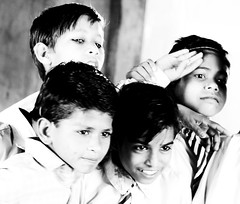 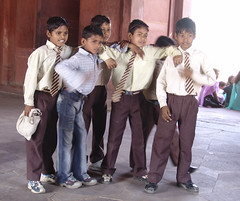 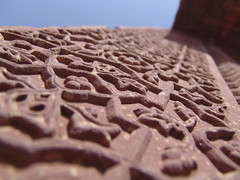 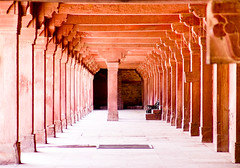 It's the red that does it 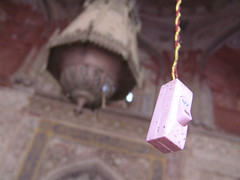 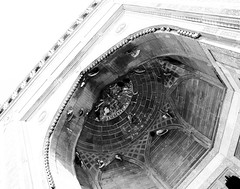 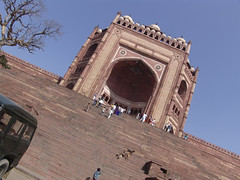 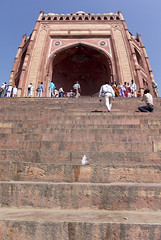 Many trains a day leave Delhi for agra. If you want to arrive early, you only have two options. One train leaving from the New Delhi train station at six in the morning, another leaving from Nizamuddin at 7.15am. The former station is a five minute walk away from our hotel, the latter a 20 minute rickshaw ride away. We took the early train, even if this meant getting up shortly after five.

The train was good. True, we paid seven euros, something of a fortune in these parts, where the cheapest tickets for the same trip are about one euro, but we also could have splurged and pay double that amount. Something Data had to do for his trip, because the cheaper tickets had sold out. Apparently, this train is very popular, probably not only for the better quality of the wagons, but also it covers the distance in two hours, where the slow, cheap trains take around six hours to cover the same distance. The only difference between Data’s expensive ticket and our cheaper ticket turned out to be the one seat less in every row. We Got water, tea and a bit of breakfast. And a newspaper. People who travel later in the day actually get a three course meal.

I had forgotten how terribly annoying the hawkers are in Agra. Like flies they keep buzzing around your head and the only solution is simply ignoring them. When you try to talk them away, they just become more persistent. Particularly in Fatehpur Sikri, it was bad. I had to restrain myself on multiple occasions to not start shouting or get physical. Swarms of touts try to get your attention, some seemingly friendly, but all are only interested in your money.
As a result, most tourists arrive by arranged tour, avoid the town of Fatehpur Sikri and, as quickly as possible move from bus to main entrance, where the high entrance fee stops the hawkers from going in. People here haven’t realised yet that pushing the tourists so hard only alienates the exact people they are trying to profit from.

Related:  Out of Africa, in to Africa

Besides the harassment, Fatehpur Sikri is reasonably impressive. Even if not as special as I expected. The whole site is a bit barren, grey( or, more accurately, red ). The entrance to the main mosque is truly spectacular and that is exactly why it’s such a pity that here you have to fight the hardest to get through the throngs annoying little Indians. Inside the museum complex, it was hot and busy, both with foreign and local tourists. Easily the hottest day we’d had so far, even though before sunrise it was fresh and, later, the temperature also dropped quickly as soon as the sun set.
My visions were grander, based on a book I’d recently read which features the king, Akbar, who built Fatehpur Sikri after a local hermit correctly prophesied the birth of Akbar’s first son. The book’s called The miniaturist.

we arrived In Fatehpur Sikri half an hour before Data and were lounging on the rooftop of what is probably the best, if not only, restaurant in town.
At the end of day we lost Data again, after we had been eating and drinking on the same rooftop after which we waited for a delayed bus back to Agra. Buses are supposed to run every thirty minutes, but forty five minutes after the last bus had left, the next one still hadn’t arrived. From our elevated vantage point, we could see a crowd slowly forming at the bus stand.
After forty five minutes, Data decided to walk around town. ”What if the bus shows up?”, I asked. ”Oh, that’s easy to see from the street.” True, theoretically.
Data missed the bus, even though it took a long time for everyone to get on the bus, some of whom had to sit on the roof.

Our hotel, the Sheela, is cleaner than Vishal and as cheap. Squat toilets, but a green and quiet Garden with a very decent restaurant, but no alcohol.

Today also wasn’t the first time I felt surprised at the many similarities between Afghanistan and India. Same shops, same streets, same dirt, similar people, similar landscape. If anything, Afghanistan is cleaner and less chaotic, more pleasant, even.