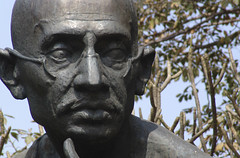 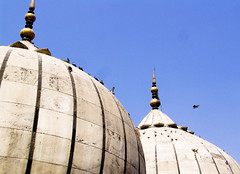 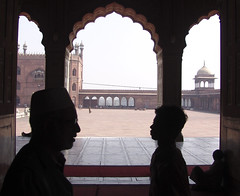 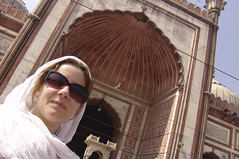 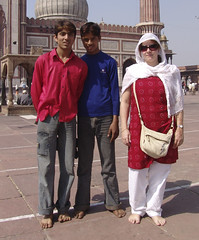 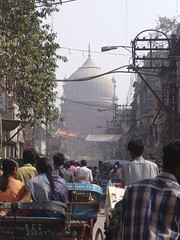 Prince of Persia screenshot... or?

Data left this morning for Agra, on train we will be taking tomorrow. Betsy and I went for a visit to Jama Masjid, India's largest mosque. Later, we visited the place where Ghandi was cremated. Next door to that is the Ghandi memorial, a museum and an Institute for Ghandian studies, whatever that may be. The mosque was overrun with tourists, the Ghandi cremation site only had a few and at the museum, we where the only people, period. Although interesting, with an extended overview of Ghandi's life, it's also tooo much.
At the mosque, we were harassed by boys and men, but in no way comparable to the levels of harassment in Agra and Fatehpur Sikri later in the week. Two young boys, immaculately dressed, practically demanded I take their picture and then asked for 100 Rupees. One beggar followed us around for a while with one hand outstretched repeating 'Huh' over and over.
We climbed one of the minarets and had a decent view of the area. Here, we stumbled into a Surinamese family also on holiday in India.

Although the mosque is big, it's also not as impressive as I thought and remembered. It's built in the same style as the Red Forts in Delhi and Agra which is supposed to be typical for the Mughal style of building. Having seen large mosques in Afghanistan and Iran, I find the style rather somber, bare.

Later, we visited Benno again at his hotel and took him out to Piccadelhi, one of the more classy places around Connaught Place. Good food and service, reasonable prices. And a guy walking around as an imitation of Charlie Chaplin. Interestingly, we weren't supposed to drink tea or coffee in the English pub on the premises, even though that was also the only place where smoking was allowed.
Dropping Benno at his hotel, he caught a cab and drove to the airport. With a minder from the hotel, who would drive him around in a wheelchair. Benno's holiday was over.

Related:  The city of joy
This text is available under a cc-nc-a license.