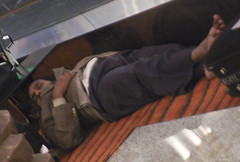 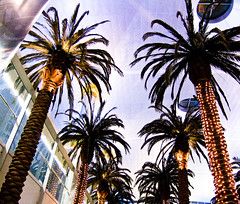 Dubai airport is very busy. Even at two at night all the shops are open, people are everywhere while almost all the seats and recliners are occupied.

The truly multicultural airport reminds me of several scenes from star wars. You know the ones, space ports bursting with activities and different races from all over the galaxy.
Here, the shopkeepers and staff are south-east Asian, Indian and sometimes local. Travelers are European but mostly Indian, Arab and Asian. And people are sleeping everywhere. It is an alien scene which also is strangely recognizable.

I expected the electronics to be cheaper. They sell A LOT. A LOT. But at prices similar to Holland. The Bluetooth keyboard I did manage to get for my MDA III, at Schiphol was even more expensive here. In an OEM version!
At the same time, cigarettes and perfumes are dirt cheap but alcohol is only slightly cheaper, as are Dunking donuts and McDonalds, while Costa coffee sells cappuccinos for five dollars.

Meanwhile, my onward flight already has a delay of 5.5 hours. And I’m not very comfortable about my luggage. My claim ticket says it is going to Dubai, but three reps at the airport I asked about this all claimed it would automatically be transferred to Kabul. I’m not so sure…

At the beginning of the flight, the captain claimed we would be flying through Iranian airspace and over Tehran. I felt thrilled at hearing this pleasant surprise which meant I would be able to actually see my birthplace for the first time in nearly three decades.
It was not meant to be. From Tabriz, the plane traveled in a straight line to Dubai, meaning we flew more or less over the border between Iran and Iraq. Staring out into the night sky, I pretended that the glow in the distance, on the left side of the plane was Tehran and that the glow on the other side came from Bagdad.

Related:  Straightened out
This text is available under a cc-nc-a license.