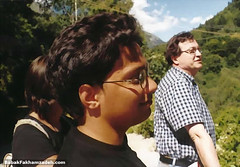 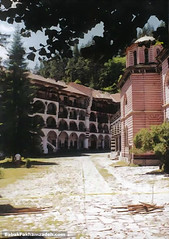 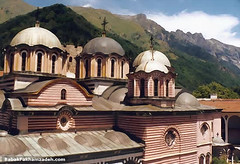 The monastery is trapped between a collection of mountains 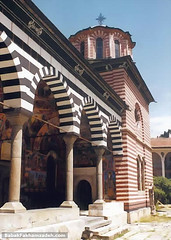 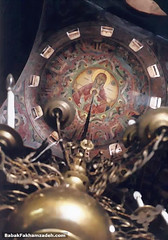 Inside the Rila monastery 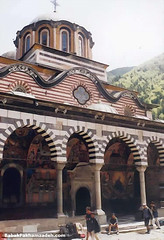 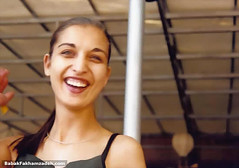 On any terrace, you get laughed at by the ladies in town 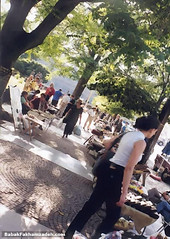 Tourist market with mainly locals, selling stuff like stamps with the face of Hitler 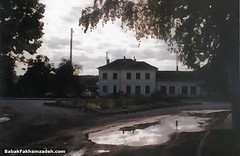 Burstling with energy, the train station were we took the train back to Sofia 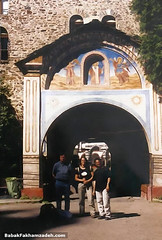 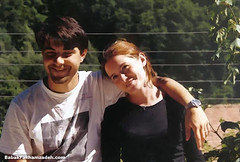 The guy in the picture was carrying a rifle with him! 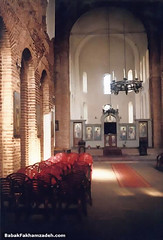 The bus trip to Rila, uneventful, took way too long. Since there wasn't a direct bus going from Sofia to Rila, we had to switch buses along the way. When we finally arrived at the monastery at 13:30, we had until 14:10, when the last bus would be going back in the direction of Sofia again. Of course we missed it, although the Finns did take it, and we had to do quite a neck braking tour to get back to Sofia before the end of the day. We had to take a bus to the nearest train station, in a place called Dupnitsa. There, however, we also missed the train, only one last train still going to Sofia that day. By the time we arrived in Sofia again it was about nine in the evening. We had been away the whole day and spent less then 4 hours in Rila.

When waiting for the bus at Rila, we started talking to three Bulgarians who had hiked across the mountains to get to the monastery. Two of them were married and lived in Boston, speaking perfect English. The third, a beautiful shy girl of 16, was going to visit her grandmother in some small Bulgarian village (she herself was Bulgarian too) and also spoke perfect English. She confessed in reading many English books, her favorite authors being Hemingway and Somerset Maugham. Each time the train went through a tunnel and the lights didn't work, we counted the number of people in the compartment, to make sure everyone was still there, Agatha Christie style.

In the evening we dined with the jet set of Sofia in one of Sofia's more expensive restaurants before going to bed. I had to get up before six, to get my bus to Skopje.