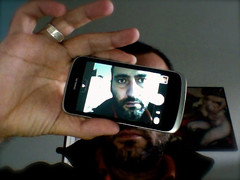 I was ready to buy the iPhone 5 when it came out (the iPhone 3G I was given by an old friend at the start of the year (big frigging kudos to Maarten!) already had it's LCD replaced and suffered from a dead camera), only to find that, not so surprisingly, the low end model was sold out pretty much before you could say 'iPhone'.
My main issue with actually getting it was the price, a hefty 659 euros (20 euros more in France and Germany), as well as the, now, relatively small screen.
Shortly before we left Uganda for Europe, Orange Uganda started selling the Huawei Ascend G300 for around 190 euros. Good value for money for this phone, which has a feature set comparable to the Samsung Galaxy S II, but a total steal at the 100 pounds the phone was going for with Vodafone in the UK.
No iPhone being purchasable and the Ascend being available at that low price meant I got myself the Huawei. True, getting it sim unlocked was another 20 pounds, but for the two phones I got, one for Niamh, one for myself, I only had to pay this once.

Though the Ascend has excellent value for money, it ain't an iPhone. Besides the specs being, obviously, less impressive, the whole user experience is also decidedly less slick. Part of that is to blame on the Ascend, with its plastic casing and not always too responsive screen, but quite a bit of that is also to blame on the operating system and the apps.
I found that apps regularly crashed and sometimes disappear from the phone altogether. Occasionally app shortcuts get hijacked by other apps and, overall, many of the apps just aren't as well designed as their iOS counterparts.
The predictive text is practical, but turns itself on and off without it being clear why. Annoying when you're typing passwords, email addresses or captchas.
Expandable storage, room for an SD card, is excellent, and a gripe I have with iOS devices. Even though the Ascend only takes a maximum 32 GB. But Android, or the apps, don't always play well with the expandable storage. Regularly, reading or writing to the card takes ages and occasionally, files disappear.
One consistent and annoying bug is that apps sorted in folders are automatically pulled from their folder when they are updated.

The biggest drawback of the Ascend, and a major issue with the Android ecosystem as a whole, is that the Ascend ships with Android 2.3, a version of Android dating from 2010. And, true to Android, it's anyone's guess whether the latest version (4.1!), or any version after 2.3, will ever be officially, easily, available for the Ascend. Vodafone, the reseller in the UK, has apparently been promising for months it will be available. First, this summer, but now, tentatively, sometime next year. Arguably, this is less so an issue with Google as with individual phone manufacturers and resellers, but this uncertain ecosystem does prevent a smooth adoption of the platform, even though flooding the market is getting Android the majority market share amongst smartphones.

One thing Android fanboys can't stop yapping about is the platform's openness, it's hackability.
So, I thought it fitting to try my luck to see if I could get my phone upgraded from Android 2.3.6 to 4.0 or 4.1. I managed fairly easily, but that's when I was introduced to Android hell.

Vodafone UK, the provider of the Ascend, is unclear as to when they will provide upgrades to the OS. Huawei, the maker of the phone, on the other hand, has the update available. In fact, it appears they have at least two downloadable from their website (1, 2). There is plenty of chatter about the official Huawei releases on the interwebs, but many of the links to the Huawei websites are dead and the updates themselves are also not easily findable from the Huawei website.
Nevertheless, I found one of the updates, copied it to my phone, and performed a regular upgrade. This, without hacking or rooting my phone. This was a, at least in my eyes, fairly regular upgrade.

However, I ended up with a version of Android, 4.0 no less, that was seemingly made for the Chinese market only. I had no Google apps on there, meaning I couldn't access the Play store. There was another store available to me, which almost only sold Chinese apps, none of which either downloaded or installed.

Later, when I had abandoned hope of being able to get rid of this Chinese version of Android, I found that there are actually many other Android stores out there (see this list for starters), including an Opera store, though none carries, even remotely, the apps you'd typically be looking for.

And there was more hope. A few months ago, an enterprising coder threw together an APK downloader extension for Chrome (APK is the compression format for Android apps) which was then updated to work with later versions of Chrome by another coder. The extension, by feeding the Play store a user's login details and the Device ID of the Android phone in question, allows for downloading the APK through the browser, for offline installation on the phone.
Annoyingly, my Chinese version of Android was thwarting all attempts to extract the Device ID. Somewhere, it was said the Device ID is the same as the IMEI number of the phone, but I'm not convinced. Anyway, the extension wasn't working for me.

So when that didn't work, I toyed with the idea of downloading the apps through bittorrent, before stumbling upon a useful alternative for downloading many, but not all, apps through QR codes over at iapktop.

I had resigned to not being able to get rid of my Chinese Android. The downloading through QR codes is a bit cumbersome, but workable and many of the apps I like were available at iapktop. But… the lack of Google apps also meant that the Google Maps Android API was not available, which meant that apps like Foursquare and Instagram were either crippled or completely failing.
I redoubled my efforts to get rid of this infuriating operating system.

There's a ton of information out there on how to root (hack) your Android phone. A few popular resources are xda-developers.com and modaco.com. Much of the information available suffers from two things. First, most of it is written by inexperienced script kiddies who don't have a proper grasp of the English language. Second, the vast multitude of Android devices means that all rooting procedures were not made uqual.
I spent many hours on many different procedures, constantly failing.

The best guide, specifically created for rooting the Huawei Ascend G300, is the extremely readable and usable huaweig300.com, which I stumbled upon by accident. All instructions in plain English while taking it one step at a time. Sadly, however, the steps failed me, both on a Windows machine and on my Mac. One particular piece (clockworkmod) just simply refused to be copied to my phone.

Then, many hours and many back and forths later, tweaking my device in every way imaginable, I did manage to get the offending piece of software on my phone, which allowed me to remove my Chinese Android and install a proper English one, with all Google goodies that came with it.
Ice Cream Sandwich, the version of Android I was trying to install, is much more responsive and easier to use than the version the phone ships with. It's pretty slick, even, though in many ways they learned from what is still, and by far, the best mobile operating system out there.

Yes, Android is more of an open platform than iOS, but going down the hobbyist route is not for the faint of heart. And, if this would have been an iPhone, not only would it have shipped with the latest version of the OS to begin with, upgrading would have been seemless.

The Ascend ships with Gingerbread, Android 2.3, which feels decidedly buggy. Ice Cream Sandwich, Android 4.0, is a very decent Operating System which made the phone much more responsive, though still in many subtle ways not as good as iOS.

The Huawei Ascend G300 has extremely high value for money at the 100 pounds Vodafone UK is selling it for, even with the 20 pound fee for getting rid of the sim lock. This ain't no iPhone, but at it's price, it's a good alternative.