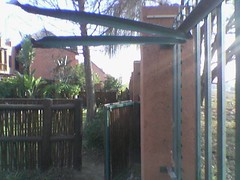 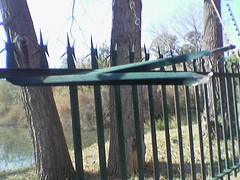 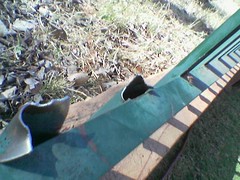 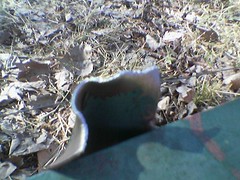 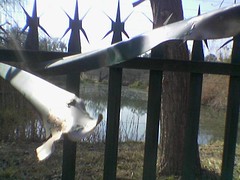 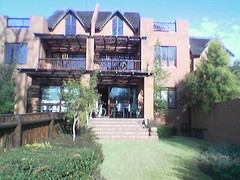 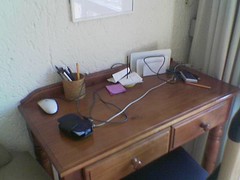 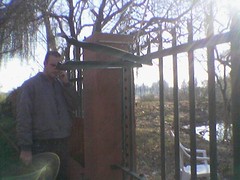 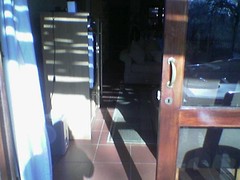 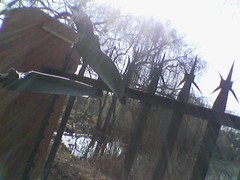 We came significantly closer to being true South Africans this morning. We had a break in.

Last night, after having a great dinner at a colleague of Betsy's, we came home at around 11pm. We started watching a movie, but we were too tired. Betsy went to bed, but I fell asleep on the couch.
At some point during the night I woke up, took of my shirt and sweater and through them on the second couch. Later, just after 4am, I woke up again and went to bed.

Betsy woke up at 6:30am. She had to work early the whole weak and was still in her early-rise routine. As she walked to the bathroom, she noticed how cold it was in the living room. The sliding door to the garden was open, stuff was stolen.
The sliding door was forced, both locks having been forced open. My laptop's gone, my external hard disk is gone, my (expensive) Sony photocamera is gone, my (cheap) Canon photocamera is gone, my Canon video camera is gone and my cellphone is gone.
Oh, my sweater is also gone. Gotta keep warm, even when you're stealing things.

What's more, the thieves had quite a struggle to get in. We live on the edge of a compound, overlooking a farm's pond where, on most days, cows stop by for a chat and a drink.
The bars of the 2-3mm thick iron fence cut and bended. Wires of the electric fence were cut. Apparently, the guards had had a warning at around 1am, probably when the fence was cut, but they spotted nothing.
This also suggests that the burglars could already have been inside the compound at least three hours before they finally broke in to our appartment.

They also took one of Betsy's handbags. The handbag had her passport, amongst other things. Interestingly, the full contents of the bag was waiting for us in our garden. Possibly they made a hasty escape and lost the contents of the bag. On the other side of the fence, beneath some autumn leaves, was the bolt cutter they probably used to cut the fence.

I hope I'll get something back from insurance. What's worse, all the work I've done over the past months was on either the laptop or the external hard disk, or both.

PS: If you want to give us a call, try Betsy her South African phone number. My Dutch phone was already stolen before I arrived at our appartment some months ago.