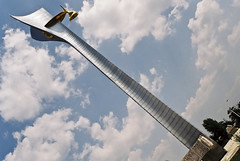 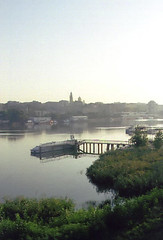 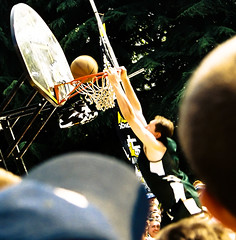 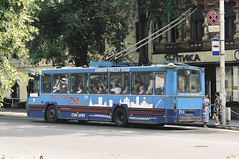 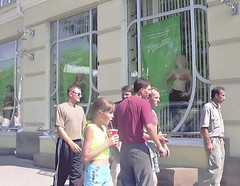 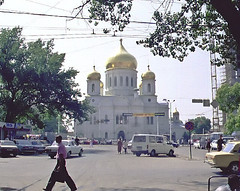 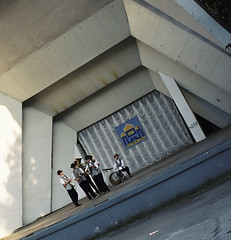 Just outside the train station, against a lamp post, an older guy, maybe 60 years old, was sleeping, bare chested, with his coat as a pillow. Already, at 8am lots of people were walking to and fro, but nobody seemed to take notice, so I decided to not take notice either.

Since, when in Moscow, I had had a hard time in getting on a boat on the Volga and since the only cruise I had done was a short one from Nizhny Novgorod to Kazan, my plan was to get on a boat from Rostov upstream, in the direction of Volgograd. I didn't have high hopes of succeeding since the primary reason why I hadn't succeeded earlier was the general lack of service. Only few boats were now sailing on Russia's waterways.

So I wasn't very surprised when I found that, indeed, only one service was still in operation and left Rostov about once every month. Once every two weeks in high season. I strolled back from the river, where the terminal was, and checked into a hotel, the Moskovskaya. Clean very roomy rooms, with a view on Rostov's main street, at a bargain of $3 a night. Unfortunately, the shower's only had cold water, but with an outside temperature of more then 30 degrees Centigrade, that wasn't the biggest problem.

At the boat terminal, I had a hard time finding the actual office where they were selling the tickets or where they could supply me with some information on boat trips in general. Mainly since half the terminal seemed to be closed for repairs. When outside, l noticed a young man and a girl sitting on a bench, at the river side, talking. The man had red hair, a red beard, sun glasses and a t-shirt with the text 'I love New York'. Judging them to be foreigners, I dug up a cigarette and went over to ask for a light. Foreigners they weren't and it took some time for them to understand that I was very interested in finding out where I could get tickets or information. Strangely enough, the guy did speak very good English (albeit with a slight accent) but they couldn't tell me where to go.

The Planet, for a change (ahem), was completely inaccurate on Rostov. Not only is its map of Rostov lacking many streets and is the layout very inconsistent, many streets have also changed names and even more stores and restaurants that the Planet mentioned have disappeared completely.

I had almost ran out of books to read, so one of my objectives here, would be to find a new collection. Finding bookstores wasn't that hard. Finding ones that also sold non-Russian literature was a bit harder and I eventually decided to try my luck at the local Intourist hotel. There, the receptionist directed me to the seventh floor, where all I found was a lot of standard hotel rooms and two (not so pretty) maids cleaning them. I tried my luck elsewhere. Which eventually worked, since I ended up with finding a Dutch book in one of the city's bookstores. And even more surprising, this store not only had Dutch and English books, but also French, German, Polish and Scandinavian literature!

Just before entering the train station to secure a ticket some time later, for going to Volgograd, police stopped me to check my papers. A brief look at my passport and visa and I could continue going in. Seconds later, inside, I was checked again. Now more thoroughly. In seconds, three policemen where busy checking everything I had. One was looking at my passport, a second was scrutinizing my visa and a third was going through all my stuff. I had to put everything I had in my pockets on a table and everything was thoroughly looked at, several times.

Related:  Not so old friends

Apparently, after some time, the two going through my papers found something more interesting. With my papers still in their hands, they started talking to two very nice looking girls, discussing what their plans where for the night. Meanwhile, I had to wait. Sometime later again, I was instructed to pack everything up again and I figured they where done with me, I could continue. Wrong. Instead of handing over my papers to me, they where given to a plainclothesman, flanked by two very sinister looking men. The first guy showed me his badge and I had to come with him. He mumbled some words vaguely resembling 'inspection' and 'detective' and I was carted of, first walking through the whole train station, then outside the other end, entering a small door at the side of the station, walking up several stairs and then entering a very small office.

The three went through my papers again and again I had to take out all my stuff. Repeatedly I was asked where I came from, if the dollars I had where fake, why Rostov wasn't listed in my visa and why I hadn't had a stamp from my hotel. When they finally believed I really was Dutch, they repeatedly asked if I had any drugs with me. Since I wasn't stupid, I hadn't, but only when I hinted that the cigarettes I had with me could be considered drugs as well, did the tension ease. I offered all three of the men several cigarettes and we started talking a little bit about Russia, Europe, tourism and, of course, Russian women. Minutes later, we happily shook hands, I could pack up my stuff and was allowed to go. I took the same trip back into the train station and got myself a ticket to Volgograd for the next day. For the first time, I would have to take a train not from the long distance train station, but from the suburban train station.

Related:  A busy Saturday with extreme lefts and rights

Back in the city, I couldn't help noticing, again, how well Russian girls seem to package themselves. They really look good in their dresses, hot pants, deep decollete, thin waists, high heels and long hair. But I, maybe for the first time, also noticed that, although their bodies are heavenly, in general their faces are less nice. Not terrible or bad, but just not up to par as compared with their bodies.
That would easily explain why older Russian women are terrible to look at. Sure, they're older and fatter. Fatter because they haven't learned to look after themselves the way the youngsters do. But what's more in line is that, as to their faces, these older women are nothing but older versions of the young goddesses littering the Russian streets. I always wandered how Russian women seemed to turn sour after 35, but it seems that they don't, not really. They just continue along the paths that their bodies have laid out for them. You just notice it now, because the older ones tend to dress worse and haven't looked after themselves as the younger generation does. Unfortunately, this only can mean one thing. If these younger babes get older, they might still be slender and very well packaged, their faces will age just like they have aged for the older generation. I shuddered when I considered this.