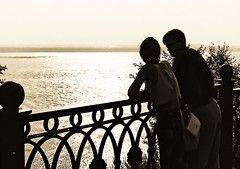 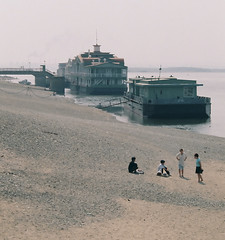 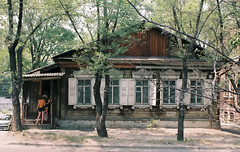 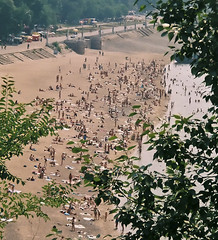 The trip was pretty uneventful, occasionally coming within 20km from the Chinese border. In the 'old' days, the Trans-Siberian train on which foreigners where allowed to ride, always did this stretch during the night, so as to avoid spying eyes as much as possible. My spying eyes where mainly focused on the babe with which I shared the cabin.

After arriving, I didn't have a hard time finding the hotel I specifically was looking for. A hostel, housing students from Khabarovsk's pedagogical academy seemed perfect for meeting locals, speaking English. Of course, since it was summer, no students whatsoever where there and I was stuck with a whole bunch of mildly friendly but very old, Russian-speaking babushkas. I did have small friendly cockroaches to keep me company though.

Khabarovsk has one main street from which all other streets fan out. It's the main shopping street and everyone who is worth anything here, can be found walking up and down the boulevard. It's not an ugly street, just plain boring. Very long, it ends up (or starts) at the river, where leafy parks and beaches make for a nice destination during summer months.

After I had finally posted the cards I had obliged myself to send home (the same cards that where given to me in Moscow), I headed for the beach and hung around there for the rest of the day. When lounging on one of the benches, after some time, I was approached by two young girls (young meaning in their teens) who wondered if I could spare them a cigarette. I could, and because of me being a foreigner (surprise), we started talking.

For a change, these two girls, Lena and Tanya, between the two of them, did actually speak a little bit of English. We spent the evening together, them wanting to know all sorts of things about Europe (and me buying them beer). When they tried to lure me into buying beer and snacks for some of their friends as well, I gave up, and after the obligatory goodbye kisses I went to my hostel.

Somehow, I had a feeling something was wrong before coming back. Unlucky for me, I was proven right. The doors of the building, and with them the hostel, had closed. Since the hostel was on the 4th floor of a 20-floor apartment building, the solution wasn't simply ringing the doorbell. There was none. I started to make a lot of racket, banging the door, shouting through one of the open but barred windows and, after some minutes, a very pissed off babushka opened the door for me. Strangely enough, the floor lady of the hostel wasn't surprised at me coming in so late (without having a key). Soon after, I joined the cockroaches and fell asleep. I decided I would move on the next day in stead of staying two nights.