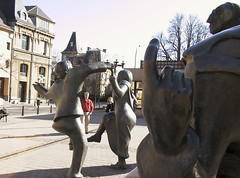 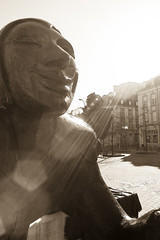 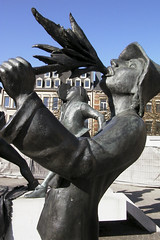 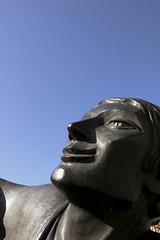 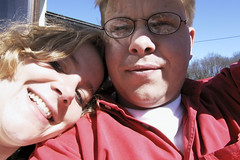 Not the most flattering photo 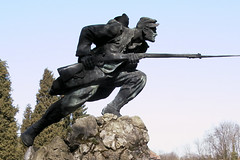 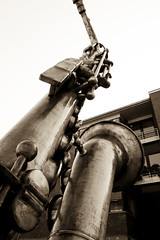 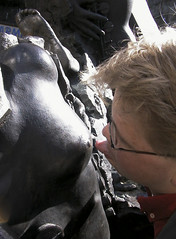 Adolphe Sax being kissed by Betsy 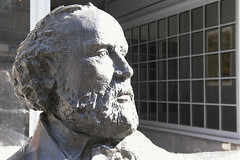 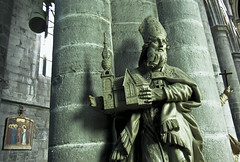 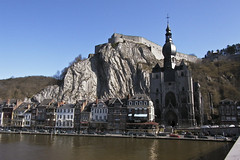 It wasn't my idea, but I don't think I really had a say in it. My girlfriend, Betsy, agreed with a very good friend of mine, Joost, that they were going to Luxembourg and I was allowed to tag along. Probably because I was needed to tell them what interesting places to go to.

We visited Dinant, Luxembourg, Echternach and Europe. Europe is a small field, very close to the point where Germany, Belgium and Luxembourg meet. The actual field apparently is part of no country but Europe and was created when the leaders of the respective countries all ceded a piece of land exactly one third of what is now 'truly' Europe.

Luxembourg is a longtime favorite of mine. The city is situated perfectly, on the edge of a gorge, big bridges connecting the edges. If anything, the town always reminds me of what fairytale cities should look like. However, since last year, when I first saw Ljubljana, I'm not really sure which city looks more like it just came out of a fairy tale.

Dinant is also very nice, albeit a bit small. It's most interesting feature is the gothic church, tall but not tall enough to top the cliffs behind it.

Echternach, a small village on the border with Germany, is interesting for its cathedral in honor of St. Willibrord, he who, supposedly, brought christianity to the low countries and northern Germany. His sarcophagus is still on display in the cathedral.

Great weekend off. But back to work. I have less then two weeks to finish five websites. Pity the fool.

Related:  Interesting weekend
This text is available under a cc-nc-a license.