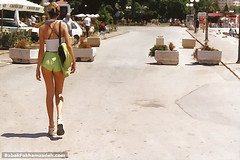 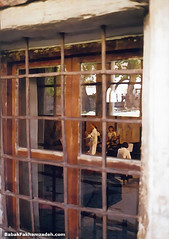 Preparing for the show which I went to in the evening 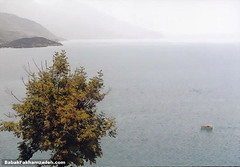 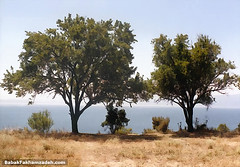 Trees, but you already knew that 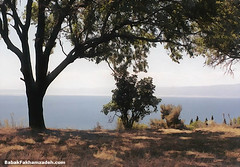 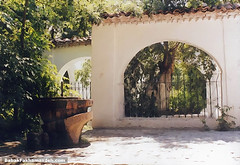 Greece, or wait, it's Ohrid 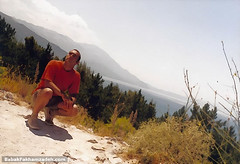 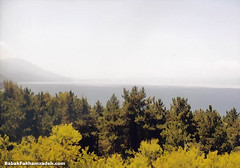 More of the lake 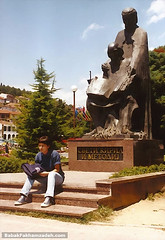 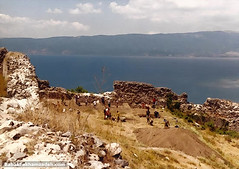 A historical dig, or should that be digg? 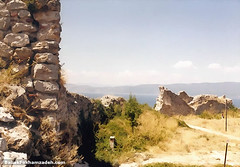 Part of the citadel 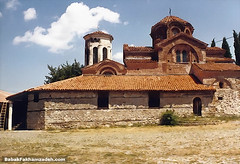 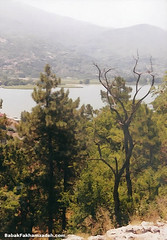 The lake as seen from the citadel 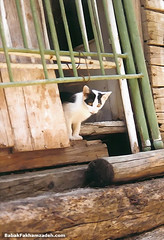 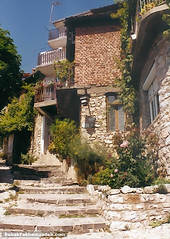 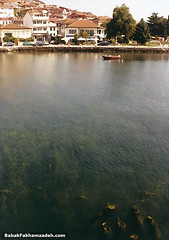 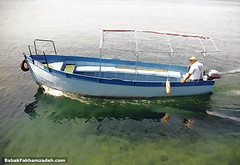 I mean, really, this could be anywhere along the Mediteranean 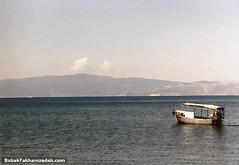 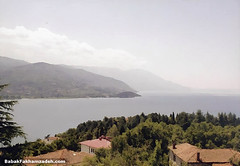 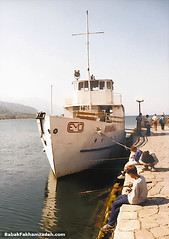 The boat, ferrying tourists from one side of the lake to the other
World » Macedonia » Ohrid » The lake shore

Ohrid is a very 'nice' place. It has a very Mediterranean feeling, but at the same time looks like Switzerland. The lake, with the backdrop of mountains is beautiful. The stalls, on the boardwalk in Ohrid, selling everything from popcorn to Kebab to Henna tattoos are appalling. If you like 'this sort of thing' and normally go to Ibiza or Crete to get your holiday kicks, Ohrid, for sure, is a much better option. I, for one, ain't really sure whether I like it or not.

I was already thinking of my journey onward. There was a bus going to the Albanian border, from Ohrid. But there, I would be left to my own devices, another bus going to Tetovo (back towards Skopje), where the Skopje – Tirana bus would come through. A minor problem being that noone, not even the bus agency, could tell me when the buses to Tirana would leave from Tetovo, meaning I might have to stay in Tetovo for a night or longer.

Ohrid has a number of interesting historical sites. A citadel, some churches, a monastery and a couple of historical digs. Walking on the citadel's walls, I noticed two familiar faces walking downstairs, some 25 meters below me. The two Germans from the bus ride from Sofia to Skopje. I went down and we talked a bit about the several possibilities, continuing traveling from Ohrid.

I now also had learned that there was a regular boat going from Ohrid to a place called Sveti Naum; right on the border with Albania. From there you could then continue Westwards. When, later, I bumped into the two Germans again, it turned out the boat service was very irregular and you couldn't always cross over into Albania either.

Although it didn't seem to be a problem to bump into two Germans on regular intervals, planned meeting with my housemates was more of a problem. Marion and Angel had planned to go swimming some place further out along the shores of the lake, and I had promised to look them up. As I did. The place they had gone too was nothing more than your average trailer/camping park on the lake shore. Housemusic thumping away, hordes of youngsters enjoying fun in the sun. And two Australians sunbathing next to me.

The scantily dressed women, combined with the time I had on my hands, made me realize a Macedonian, perhaps Balkan trait: Women have short legs, big asses, no small waist, big breasts, long noses, dark hair and light colored eyes.

Traveling back from the camping site to Ohrid, I bumped into too much Dutch for comfort. In stead of a regular bus service, a private taxi was operating the line between the camping and Ohrid. It being easily noticeable I wasn't Macedonian, the driver asked where I came from. On revealing I was Dutch, the driver started to talk Dutch to me. I couldn't believe my ears. It turned out he was married to a Dutch woman, now living in Macedonia. Half way the trip, his parents in law boarded the car. Even more Dutch. Imagine this, you're in a private taxi, traveling by yourself, sharing it with some 9 others, in the middle of Macedonia and about half the group speaks Dutch. Terrible!

Back in Ohrid, since I had missed Angel and Marion altogether anyway, I got myself a ticket to one of the events of the Ohrid Summer festival, an international festival of dance, music, theater and more. Earlier in the day, when walking through the old town, I had bumped into the general rehearsal for the show I got tickets for.

It was time to decide on the next leg of my trip. There was a Hertz office in Ohrid, so I went in and asked how much drop off costs would be for renting a car here and driving to Albania. "Too expensive, not good." Pressing on, the agent revealed that drop off costs would top a hefty $1000. I, very quickly, decided that hiring a car was not such a good idea.

Meanwhile, in the same office, another Dutch guy was trying to rent a car as well. After his heated discussion with the agent, we talked a bit and decided to go for a beer. It turned out he had gotten tickets for the same show that night, as I had. He invited me for dinner, after which we would go to the show.

Jan worked for VSO, a humanitarian organization, where he had a task as something of a management consultant for the local government. The emphasis being on 'something of', although he was reasonably satisfied with it.

In the evening, just before the show, we were joined by Annitsa. A very interesting woman, head of a translation service, she had lived in the UK before and, because of that, was asked to be part of the welcome committee for Prince Charles some years earlier, also in Macedonia. Some things she said in a discussion we had later on still sticks in my mind, even now: "Don't focus on what you can't change. Focus on what you can." and "You have to decide what you want from life, you have to use opportunities yourself."

The performance, a small classical orchestra, being taped for live national television, wasn't all that bad. A pity that during the break no drinks or snacks were served. So, we had no choice but to go for a multitude of drinks afterwards. Not that I really had the time for that: My bus, supposed to drive me to the border, was leaving at 6:30am. I had decided to try and get to Italy without backtracking. If nothing else, it was at least going to be interesting.