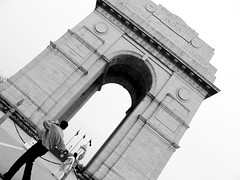 Benno was supposed to start walking today and, since we really didn’t want to miss that happy occasion, we waited around for a very long time for someone to help the poor fellow out. No one did show up and we decided that, really, two and a half hours of waiting was enough for one day.
The next day that the original ’30 minutes’ before his first walk ended up being seven hours.

Hogo and Wong left on a grand tour of Rajasthan today and Betsy, Data and myself went over to India Gate, where the touts were annoying. From there we walked over to prime minister Mr. Singh’s house. He was already having tea with president Chirac, so we left.
In the evening, we stayed at the hotel and had Shyam brew us a nice veggie curry. From the rooftop, we watched a wedding procession pass by, complete with lights, drums, a band and the groom on a horse. Earlier, a guy on an elephant had also passed by.

Related:  Out in the cold
This text is available under a cc-nc-a license.