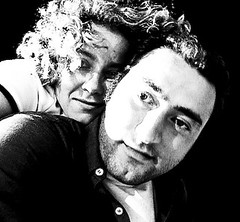 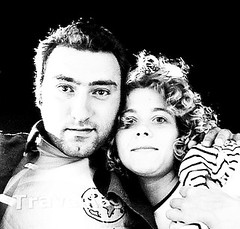 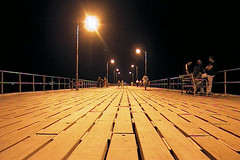 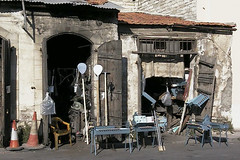 What are they selling? 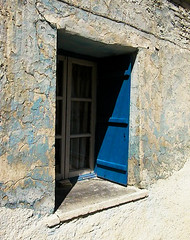 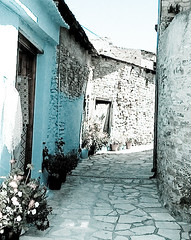 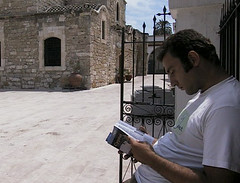 For the last two days of our trip, we wanted to rent a car because we planned on driving a bit further as before. In fact, we wanted to go to Lemesos (Limassol), some 65 km to the west of Larnaka and, after that, to Pafos, some 80 more kilometers to the West. There are a couple of highways on the island and, with the right transport, traveling can be reasonably comfortable. Still, we were unlucky; there were no more cheap cars available.
We decided to go for a bigger and faster scooter and drove west. After visiting Lefkara, we also went to Lemesos and came back at night. That was WRONG. Although we could travel quite fast, some 100 km/hour on the highway, it was impossible to do so. We were dressed for the warm summer days but, in the evening, the very cold winds rolling from the mountains made it simply impossible to drive anything over 50 km/hour and even then it was a terrible experience. The end result was that, on the last day in Cyprus, we rewarded ourselves with a day on the beach.

Lefkara, high up in the Troodos mountains, is a nice small village. However, you have to watch out not to be harassed by the army of women who try to lure you into their homes and sell you their lace. Originally, back in the Middle Ages, the women of the town started making lace to make money when their husbands were away at sea. At some point, probably after the men weren’t going out at sea anymore, the men of the town started to make silverware.
The small town, actually two small towns close together, is very enjoyable and made me think of a small Greek village if anything else. Here, too, the occasional busses with tourists stop on the town square but if you’re able to avoid these, the town is nice enough to spend a few hours in.

Related:  What’s the competition at the World Summit Award

After Lefkara, we drove to Lemesos, another tourist hot spot for its many bars, restaurants and night clubs. The city is not all that interesting, culturally. The only real attraction is a small castle, not more than a tower, on which its site in the 14th century, Richard the Lionheart married his betrothed Berengaria. In the courtyard of the structure, you can find an olive oil press from the 7th century.

The one typical Cypriot thing we did do in Lemesos was to eat Meze. Meze is basically the Cypriot version of eating Spanish tapas. You order ‘Meze’ and then, for half an hour to an hour, small bowls of food arrive at your table. As you can expect, one order of meze can feed about 25 people so at the end of our meal, we had quite a difficult to walk through the door on our way out. Then again, the extra insulation helped us in getting home, through the evening cold.

As said, we spent the next day on the beach, enjoying the sun before returning home to sunny (ahem) Holland. We later learned that during our week in Cyprus, temperature back home had risen to an impressive 25 degrees for a couple of days. So why did we actually leave?
Would I go back to Cyprus again? Well, there still are a couple of sites we didn’t have the time to visit. However, the country isn’t all that spectacular as some other countries in the Middle East. Would I go back? Probably not, although one trip is still a bit tempting: taking a boat trip from Turkey to the North of Cyprus.

Related:  Christmas on the river Kwai
This text is available under a cc-nc-a license.