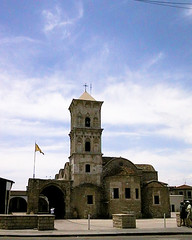 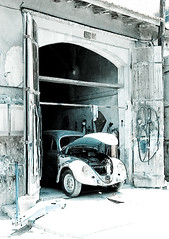 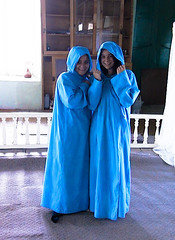 For one, there’s the grand mosque. Betsy had brought a piece of cloth to cover herself with, so that we could enter a mosque and she had used it a couple of times in Lefkosia. Here in Larnaka it wasn’t enough. She had to wear a blue coat to cover herself completely and with it, she looked more like a ghost then anything else.

Another feature is the Lazarus church. In the crypt of the church, the man-who-didn’t-die is supposedly buried. After he was raised, he moved to Cyprus and became a bishop in Larnaka for 30 years. The structure isn’t all that bad, but unfortunately, the church was closed when we were there and we couldn’t go in to see the man for ourselves.

Related:  The future’s so bright…
This text is available under a cc-nc-a license.