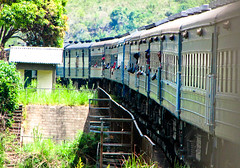 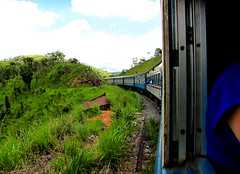 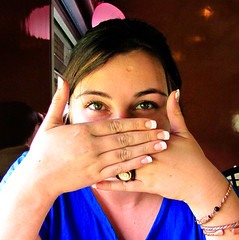 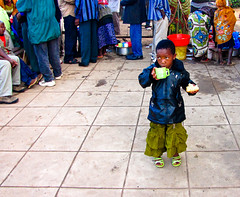 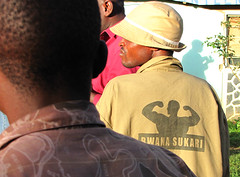 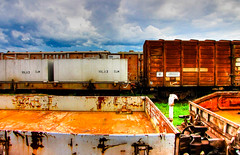 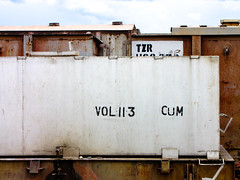 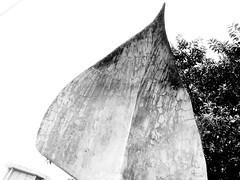 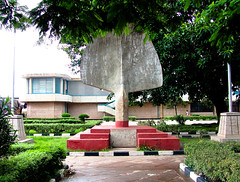 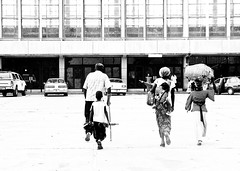 The Chinese were already meddling in African affairs in the 1970s, when they were contracted to build the TAZARA railway, which connects Tanzania to Zambia. As can be expected, the eastern terminus is in Dar Es Salaam, the 'haven of peace'. The western terminus, on the other hand, is in the hole called Kapiri Mposhi, for which it's reason of existence is pretty much just being the Zambia terminus of the TAZARA railway.
Kapiri, some 200 kilometers north of Lusaka, can theoretically be reached by train, as Zambia has its own train network connecting Livingstone, through Lusaka, with the Copperbelt in the north. However, not only are the two train networks not directly connected, there being two train stations in Kapiri, taking the local Zambian trains is also not advised, meaning you're left with taking a bus from Lusaka to Kapiri.

I had booked our TAZARA train tickets some four weeks earlier, expecting the seats to fill up quickly in the run up to christmas. I was reasonably right, though mostly because the TAZARA office in Lusaka only sells 8 beds on each train that leaves Kapiri. Of the over 120 beds that are available on each train, that's not a lot, at all. And because the cabins are male or female only, it's not uncommon for couples or families to reserve a whole cabin, to allow the family to sleep together.
So, when I wanted to book, all 8 available beds for our train had been booked by one family. It took another week of phone calls and arrangements for me to be able to buy two tickets, which presumably had to physically come from Kapiri.

In the not too distant past, four trains a week plied the distance between Kapiri and Dar, and vice versa. But as this is Africa and everything slowly degrades without being serviced or upgraded, the service is now down to two trains a week, each way. And, as the train ended up being overbooked, this is clearly not because there's a shortage of demand.
There's practically no budget airline industry in Africa, outside of South Africa and although Zambezi Airways is offering some decently priced tickets on several routes, including the Dar to Lusaka route, for the period around christmas, it didn't include the christmas period itself.
Niamh and I are flying back from Dar to Lusaka, a roundtrip only costing us a bit over 200 dollars, where the regular rate is closer to 400 dollars for a round trip. Our first class sleepers on the TAZARA came in at about 50 dollars, one way. The Friday train's first class sleepers go for 40 dollars. Other classes include second class sleepers and third class seaters.

The obvious downside is the time it takes to get from one end of the train line to the other. We left at 8 in the morning for the Lusaka bus terminal. The lady at the TAZARA office told me I would have to book a bus ticket to Kapiri one day in advance, to make sure we would have a ticket. I did, but when we arrived at the bus station, having a ticket didn't amount to much. Our bus was already fully occupied, meaning we had no choice but to take the next bus. Having a ticket in hand for the bus actually waiting on the platform didn't make any difference whatsoever. We could have just gotten a ticket on the day of departure.
Additionally, though we were traveling on 'Euro-Africa lines', and, no, they don't travel between Europe and Africa,, which is slightly more upmarket than some of the other services, we still had five seats in each row, meaning everyone was crowding everyone else. Though, the regular, smaller, busses, tend to be even more crowded, even though they run for most of the day and you definitely don't need to book in advance.

After a rather vocal preacher had livened up the ride during the first 30 minutes, the bus dropped us off some 3.5 hours after departure at the bus station in Kapiri, where a dozen or so touts tried to sell us their taxi services for getting to the TAZARA terminal. Selecting one and getting into his car was followed by a boy trying, but failing, to steal one of our backpacks from the back seat.
Five hours after leaving home, we arrived at the terminal, still with three hours to spare before our train was scheduled to depart.

The bus from Lusaka straight to Dar takes a scheduled 27 hours and costs about the same as a first class ticket on the train. However, the scheduled travel time on the train is 43 hours, two whole nights spent on the train. Our locomotive broke down in Makambako, not long after crossing the Tanzanian border, which was partially responsible for the 12.5 hour delay we ended up having to deal with, bringing our door-to-door travel time to around 64 hours.
The border crossing at Tunduma, which straddles both sides of the border, went surprisingly smooth. The Zambian immigration officer stamped our passports without looking at our visas, meaning that if you've overstayed your visa in Zambia, leaving by TAZARA is the way to go. Shortly after, the Tanzanian immigration officer also didn't take up much time stamping our passports for entry, while it was also possible, and easy, to get a visa upon arrival, as some of the foreigners, black and white alike, had to do.
Though I had booked our room in Dar, and reconfirmed while on the train, I had a strong feeling that if we'd arrived only minutes later, the receptionist would have given away our room to whomever had come first. As we arrived around 1am and all hotels in the area were fully booked, we only barely got away with a first decent night after two hot nights on the train.

Electricity on the train is only on in the evenings, and even then air conditioning and fans are not available. As not all the windows open, this can result in your sleeping cabin ending up being a little sauna. Not great, considering that there's also a premium on running water. Though there's actually a working shower in some of the coaches, the toilets don't flush and don't come with toilet paper.
There is a dining cart which serves very decently priced and very reasonable meals the whole day through. Unfortunately, they don't accept Tanzanian shilling in Zambia and no Zambian Kwacha in Tanzania, which is of course ridiculous. The barman on our journey, on the other hand, was more flexible, accepting both currencies throughout the journey, though he was much more reluctant to exchange money. Not in itself a big issue, as on the border in Tunduma, hordes of touts exchange money and sell sim cards and airtime. However, we, not knowing that the restaurant was not going to accept Kwacha once crossing the border, didn't give them much attention.
Also, though Zain, formerly Celtel, numbers are supposed to be portable across their whole network, from country to country, mine stopped working once we had crossed the border.

The ride across the great rift and through the mountains in western Tanzania is awfully pretty and even though our journey took about twice as long as what it would have taken us if we'd taken the bus, I probably would still recommend the train. Just being able to get up, walk around, have some food and drinks and whatnot is worth a lot.
What was more worrying, specifically in the mountains, were the scores of train carriages wrecked on the sides of the tracks. As were some of the bridges which were so small that, even hanging out of the window and looking down, were impossible to see.

In Dar, a tout offered us a taxi ride and we followed him up to the front of the train station, where he demanded an absurd 30000 shilling, some 15 euros, for a ride into town. As the walk from the train to the taxi stand was long, it was going to be impossible for him to go back and pick up another set of whities, meaning our bargaining position was strong. We got the ride for 10000 shilling. Still too much for the distance, but considering this was 1230 at night and the number of taxis was limited, this was not a bad deal.