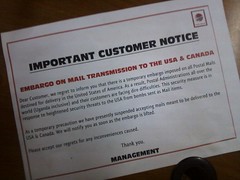 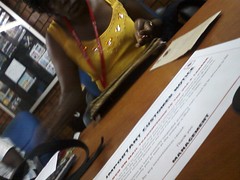 After first struggling to find a place that sells postcards, I then struggled to find a working post office, in the end having to get to the downtown main post office to send a postcard to the USA. (Really, why even bother to sell cards to tourists?) Only to discover that there’s currently an embargo on postal services to the US and Canada.

Due to a heightened fear of receiving parcels from Africa to the US containing bombs, the Ugandan postal services is currently not accepting postcards to the US.
As these things go, details are tricky to extract from civil servants the world over, these postal workers being no exception. In order for me to find out when this embargo was to be lifted, a gentleman at the service desk gave me his personal cellphone number to call.

“When will this be over?” I asked. “They said they will contact us again in March.” They? March? I has a sad.

Update (10 Feb): A newspaper article yesterday claimed that the ban was worldwide but only for packages. The ban was announced in November last year, indeed after the Yemen mail bomb, saying it would come into effect when post offices (outside the US) wouldn’t be able to use bomb sniffing equipment by February 2011. The article claimed that the equipment costs some 100.000USD and strangely said that, in Uganda, all mail to the US, not just packages, won’t be accepted for the time being.
Apparently, also according to the article, Uganda sends no less than a million pieces of mail to the US, annually, which either results in a turnover or a profit (the article wasn’t clear on this) of 35 billion Ugandan shillings. I find this a bit rich, as this currently equals some 15 million USD. If, indeed, profit, or even turnover, on mail to the US is that high, spending 100.000 USD on equipment to keep the money flowing seems a pittance.

Another article in the Monitor has a slightly different story and is not completely correct, citing different figures and claiming that the ban goes into effect today (the 10th).

Interestingly, searching online for more info seems to suggest this embargo really only applies to Uganda.