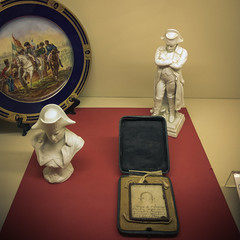 Saint Helena was not only home to the banished former Emperor of France. The Zulu king Dinuzulu spent seven years on the island after rising up against the Brits in the late 19th century, and some 6000 Boers, including the somewhat infamous Piet Cronjé, also spent time on the island, after the Anglo-Boer war.
But neither Cronjé nor Dinuzulu died on Saint Helena, Napoleon’s final resting place.

Saint Helena was granted to the English East India Company in 1657 by Oliver Cromwell. The Dutch East India Company briefly took control in 1673, but after control shifted to the British Crown in 1833, it was only in 2002 that, finally, the British state granted full British citizenship to the islanders. Recently, the island was in the news for Britain spending 250 million pounds on an international airport, which has difficulty accepting large planes due to continuous strong winds, exactly what Napoleon also complained about in the years before his death.

Napoleon was in exile on Saint Helena for only six years, from 1815 to 1821. Most of his time, he stayed at a place called Longwood House. Eventually considered unfit for a former emperor, a new home was constructed starting in 1818, but Napoleon passed away before he could move into his new quarters.
In 1858, Napoleon III, Napoleon’s nephew, gained possession of Longwood House, which is still French property today. Incidentally, Napoleon III, before becoming emperor of the French, was the youngest elected president of France until Macron just this year, but, Napoleon III’s biography reads more like that of a late 20th century African dictator than anything else.
Recently, Longwood House was completely refurbished, the stone steps leading up to the property the only part left standing from Napoleonic times, the literally poisonous wallpaper having long been removed.

After arriving on the island, the British government made the members of Napoleon’s retinue sign a guarantee they would stay with the high profile prisoner indefinitely. This included Napoleon’s valet, Louis Marchand, whose diaries were published in 1955.
Marchand’s narrative was a trigger for claims that Napoleon was slowly poisoned with arsenic while on the island, with Napoleon himself, in the weeks before his death, also claiming the Brits were slowly poisoning him.
Symptoms described in Marchand’s diary supported this claim and, eventually, chemical analysis of some of his remains seemed to support this as well. However, recent additional analysis, including of hair samples from throughout Napoleon’s, and his family’s, life point to the opposite; Napoleon had high levels of arsenic in his body from his early years onwards, some 100 times present-day levels, simply through environmental contamination, including fumes emanating from a coating used in the wallpapers of Longwood House, which Napoleon himself made worse while on St. Helena by drinking large amounts of orgeat syrup, a lemonade made from almonds, which are naturally rich in arsenic.
The hair samples that were studied included those cut off by Marchand, as requested by Napoleon, who asked Marchand to, after his death, use his hair to be put in jewellery and be presented as a gift to Napoleon’s direct family.

Fast forward a century and some of these hair samples started to show up in various places around the world. Distant relatives, presumably, starting to sell off the locks of hair handed down from generation to generation, considering the sentimental value less relevant than their own financial interest.
This went so far that, only a few years ago, a distant relative of Napoleon, a watchmaker in Geneva, started making watches with strands of Napoleon’s hair embedded in the clockwork.
Another lock of hair made it to Rio’s military museum in Copacabana. The lock was donated to the museum in 1992 by the family of Marshal Castelo Branco, the first president of Brazil after the 1964 military coup. Castelo Branco’s most infamous legacy is probably a draconian press law that stayed in effect until 2009.

But, how Castelo Branco, or his family, came into the possession of Napoleon’s hair is not clear. Castelo Branco was born into a wealthy Northeastern Brazilian family, with his mother coming from a family of intellectuals while he himself studied in England, France and the US, and fought against the Germans in Italy, as part of the Brazilian Expeditionary Force. But, the connection with Napoleon is not clear.

Back on the island, Napoleon’s last words were “France, army, head of the army… Josephine…”, Josephine being the name he himself had given to his first wife, whom he divorced after she seemed unable to give him any children, even though he, obviously, remained dedicated to her for the rest of his life.
It’s not known with certainty what the name ‘Copacabana’ refers to, but it’s reasonably certain that a beach by the same name on Lake Titikaka in Bolivia derives from the Aymara name for a god of fertility, that which was denied to Napoleon by Josephine’s lack of being able to procreate.

Napoleon was initially buried on St. Helena, but in 1840 his body was repatriated to France and given a state funeral. His tomb can now be visited at Les Invalides, in Paris.