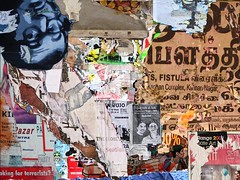 Back in Lima, a few weeks ago, I attended the opening of an exhibition where the artist’s most prominent works were palimpsests which he had constructed himself from individual pieces. I thought the idea nice, but the results also somewhat amateurish. In addition, there didn’t seem to be any meaning to his constructions, which made me realise that art without meaning is just play.

I decided to try my own hand at creating a palimpsest, where the individual components are taken from palimpsests from across the world.

The image above consists of pieces from:

Related:  Budapest from 1 to 100
This text is available under a cc-nc-a license.