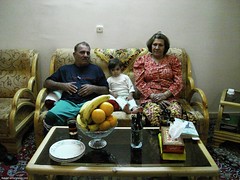 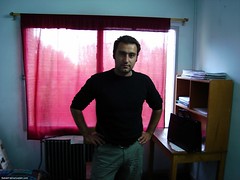 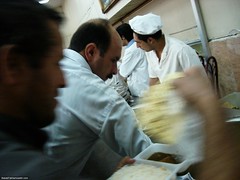 Grabbing food at the university restaurant 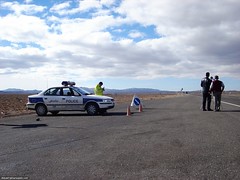 Getting fined
World » Iran » Mashhad » Home of Husheng and Fatema

Here, I occasionally feel like a trophy which needs to be carried from shoulder to shoulder, each individual wanting to get a piece.
Two days after my father's commemoration 'service', I went with one of my uncles to Mashhad, where he lives. The original plan was to visit the cities of Gorgan and Bandar-e-Torkaman and, initially, it was my assumption we'd visit these places on our way to Mashhad, as they are roughly halfway between that city and Tehran. I found out, rather late, that the intention was to first go to Mashhad and then return to those two places later on, after which we'd return, yet again, to Mashhad. Considering the distances involved, this was going to be a challenge. The drive to Mashhad from Tehran is around 12 hours, but Gorgan, from Mashhad, on a different road, is about 8. A lot of driving for a little bit of sightseeing. I knew better then to discuss the options before our departure for Mashhad. And in Mashhad, when finally we did get round to discussing the options, it indeed took several hours before, at last, the decision was made to take it more easy and visit cities more in the neighbourhood of Mashhad (but, of course, the next morning, the plan changed once more). Not too bad a thing, as it seemed that I'd be challenged anyway, with no flights available between Mashhad and Bushehr for the foreseeable future for it being that time of the year again when everyone's favourite Emam is being commemorated in his shrine, the extravagant complex in Mashhad. As a result, with no flights available, I would have no choice but to take the bus, a whopping 24 hour ride through deserts and dry salt lakes.
But strangely, after calling the travel agent from Tehran several times, being told no flights were available, I had no problem getting a ticket when I appeared in person.

Talking with my uncle is quite a challenge at times. Here's one example. Let's say he tries to communicate a profound knowledge, as he occasionally tries to do (realise I'm far from fluent in Farsi):

Husheng, my uncle, is also probably the worst driver I've ever sat in a car with. And he can be a hothead, but I suppose that runs in the family. And I'm sure some people would think the same about driving skills.

Surprisingly, Fatema, Husheng's wife, has thrown off the veil. Well, in the house anyway.

After our day in Sarakhs, I mentioned I really had to do some work, on-line. We went looking for a nearby internet cafe, but, as to be expected, my 64 year old uncle was not up to that task of locating one. Coming home, a younger relative of my uncles wife, Ali Reza, who's studying to become a doctor at Mashhad university, turned out to be paying a visit and it was quickly ordained I'd join him the next morning to use the internet from his school of learning. I happily agreed, not realising that would almost certainly also involve having to jump through several hoops.

The hoop jumping turned out to be bearable. The smallest one (or would that be the most ornate one?) was meeting the professor, with whom it was expected I'd be speaking some French. She didn't show up. But I was paraded around and had to enjoy lunch at the university restaurant while having to shoot pictures with Ali Reza posing here and there.
At the university, too, Flickr was blocked. No new pictures for you to see just now.

Related:  Bugs in my wine

At the university, everything's a bit bare bones, simple and a tad sterile. The campus is huge, but the students still sleep with four to a (small) room, the doctoral students having a room to themselves.
Of course, man and women dorms are in separate buildings and even the buses that shuttle people between buildings are male or female only. In the regular buses, outside campus, the women sit in the back, the men in the front. There are also two restaurants, one for the men, one for the women, and even the computer room is segregated. Talk about apartheid.
And naturally, it's all a very decent affair. Ali Reza strongly suggested it really would be better if I'd tuck my shirt in. I saw him looking at my shoes without too much appreciation.

Later, I was taken to the hairdresser's. Looking at my face in the mirror, while the hairdresser was doing his thing, Ali Reza and Husheng were discussing my linguistic abilities and, after my haircut, my increased chances with the local women. In the mirror, I first recognized a Beatle, then the Dutch side of my family and then my Iranian cousin.