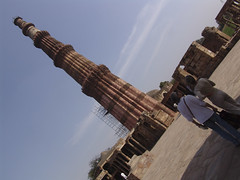 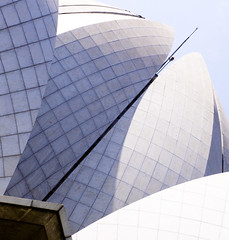 Travel guide books don't describe Delhi as the best thing since sliced cheese. Today, again, we easily realised why; the few sites Delhi has to offer are few and far between.
After buying train tickets to Agra, the location of the Taj Mahal, Data for Thursday, Betsy and I for Friday, we took a cab to the 'lotus temple', a Bahai shrine, after which we finally went to a venue I hadn't seen before, the Qutb minar.
The Bahai temple, shaped like a lotus flower, is a quite impressive thing. It's also very popular with tourists but the minders, who speak perfect English, most with a foreign accent, gave me a bit of the creeps. They reminded me of Israeli PR consultants, who defend Israel's terrible policies with words the west finds pleasing to hear. What I did find surprising was that the temple itself, where you're not allowed to make any sound whatsoever, indeed feels like a tranquil haven, even though thousands, if not tens of thousands of tourists poor in every day.

Every guide book on Afghanistan, that is, all three or so, mention that Afghanistan has the second tallest minaret in the world. If you do a web search on this, you'll find many references to this minaret, the minaret of Jam. Some of these texts also mention what the tallest minaret in the world is: the Qutb minar in Delhi. Strangely enough, the Lonely Planet for India doesn't mention this at all.
When I got back from India, I did some searching and found that the tallest minaret in the world is actually located in Morocco. At some 210 meters, it's significantly taller than the one in Delhi, which comes in at around 73 meters. In fact, in Tehran, my fellow brethren are building a mosque with two minarets weighing in at some 230 meters. What it comes down to is that the phallic Qutb minar is the tallest classical minaret in the world. Although the site is nice, including the remains of another minaret which was supposed to be twice as tall but never made it past the first storey and an ancient iron pole which has never rusted (gasp!), I wasn't that much impressed.

After our tourist outing, we picked up Benno and went for dinner on the roof top of our hotel. We were joined by a sweet black cat who we gave some of the desert I had picked up from the German bakery downstairs. The cat was missing one paw, leaving us no choice but to christen the cat 'Benno'.
The German bakery is owned by the same guys who run Vishal. We never tried their regular dishes, it's much more enjoyable on the roof terrace, but their deserts are quite good. The apple crumball (sic) pie IS the best.